The success of Planet Earth might tell us something about the way we think and do business. The BBC has confirmed that the first three episodes of Planet Earth II have attracted more viewers in the 16 to 34 age bracket than The X Factor on ITV

However, there is another dimension to the story. The rise in popularity has been attributed to the development of the technology used, the sound editing and the music. The overall experience has improved and as a result, it has managed to re-engage a new audience.

The rise in popularity of Planet Earth among young generations tells us a lot about how we engage the market today.

The success of Planet Earth shows how all experiences need to reinvent themselves, and that the visual and listening sense are the most important element in reaching and engaging audiences. It was often in the past said that the best way for any campaign to be really successful was via music. Today is also the visual message.

Another old saying is that “a picture is worth a thousand words”. In a world where we are all overwhelmed by information with too many emails and long working days, the best way to engage in marketing is through a visual story. 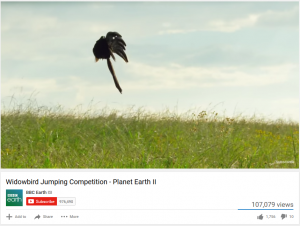 In a recent article by Forbes about the 7 Online Marketing Trends That Will Dominate 2017, it is noted how both Live Video Streaming will fully take off and what they call “dense content’ will become essential to cut through the content noise”

So if that’s true, should comms be less about the written word and more about appealing to emotional senses?

Appealing to the emotional is more powerful than any verbal argument.