Absolute Taste have been on some journey in the last 12 months which has resulted in a move from London to Bicester and a new commercial model disrupting food service for the better. EP met with Neil MacLaurin, Chairman to discuss how this all came about, the philosophy behind the business and the exciting future on the horizon.

EP spoke with Neil at their new HQ, only a five-minute drive from Bicester Village Train Station. The relaxed Chairman has an air of confidence without being brash or flippant, he and his senior team simply have a vison for the future of the business which they are striving to achieve for the better of everyone involved.

When one thinks of Absolute Taste, they will likely have a picture in mind of quality event catering and perhaps McLaren Formula 1. One of the first contracts, Lyndy Redding delivered when creating the business in 1997 with Ron Dennis, the then owner of McLaren. Toward the end of 2016 the company was acquired by One Event Management where Neil was Chairman and today the business operates under the Absolute Taste title. Neil and Lyndy are joined by Nigel Harris, owner of The Proper Food and Drink Company, and founder of Fresh Direct, combined they have a created a unique and impressive vision. One which is already well on its way to achieving with their impressive new Central Production Kitchens in Oxfordshire.

Neil explains, “We knew this site well as Nigel’s company Fresh Direct are based across the road and having had a good look around we knew this was the best location for us. Especially as Nigel was already in Bicester which has excellent transport links and ideally located to distribute around the country. Part of the dream for the business was to bring everything under one roof which not only has positive cost implications but sustainability and team morale advantages.”

“A Willy Wonka inspired garden full of surprise with beautiful food and drink.”

Neil is quietly confident with the move and very content with how their Google esque offices have turned out at what they have called “The Shed.” The 85,000 sq ft facility includes a mezzanine where they have built two kitchens and three tasting rooms. A third kitchen is currently being constructed, as is a unique “secret” garden which Neil describes as, “A space where visitors, in the near future, will be taken on a sensory journey. We’re having great fun designing a ‘shed’ door which creates the illusion of nothing special, but when guests, customers or suppliers go through they enter a space which is a Willy Wonka inspired garden full of surprise with beautiful food and drink.”

It’s an ambitious move but with everything under one roof it has a powerful impact. One kitchen is chef-led with moveable equipment and where they create their event catering menus, and the team can also showcase dishes in tasting rooms that run alongside. The other separate space is their ‘in-flight’ kitchen which is a high-risk environment and recognised as ‘air-side’ for their private aviation business. Not only do they provide the food for guests, but also source flowers, publications and is basically more of a full concierge service for the private aviation sector that operates 365 days a year. 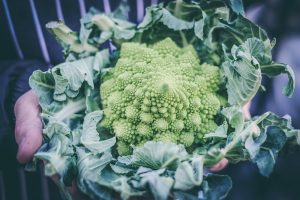 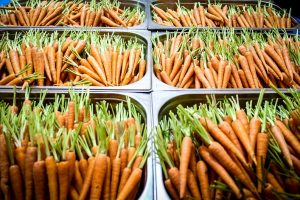 “We have created these kitchens with their own goods in and QC areas, with our set-up we also reduce the amount of packaging coming in from suppliers as everything is decanted in to reusable plastic on site, no cardboard or SUP. It has a far better impact on the environment and something we are also looking to do far more of across our businesses.” 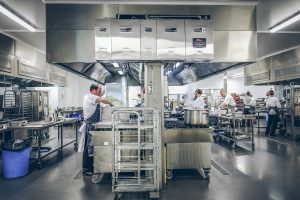 Absolute Taste have created a sufficient food journey for their menu creation but have also revaluated their approach to food. With many acres of their own farmland, the caterer is now growing a lot of produce itself. This has all the obvious advantages and Neil is also ensuring that clients understand the food journey and why a Central Production Kitchen is part the right strategy moving forward.

“When we meet with clients we are explaining that our menus reflect the seasons and the best available produce. We will grow as much as possible here or use Nigel’s expertise in food sourcing to ensure we’re getting the best we possibly can at any time of year. Therefore, menus will be reflecting this by simply saying “white fish” if the event isn’t for six months, it will be the best white fish at that time of year not necessarily Seabass, Pollock or Sole but fresh fish from our waters from fisherman we know. We feel its important to share our food knowledge with everyone involved and explain why we shouldn’t plan to include raspberries for example on a menu in November. We can of course adapt to any client request but want them to understand that it may have to come many, many miles, cost more and, more importantly, won’t be as tasty as alternatives.”

This transparency is echoed with how Neil and the senior team are working with their teams. Absolute Taste were based in Wandsworth Town and therefore it was quite a move from London to rural Oxfordshire, although only a surprising 45 minutes journey by train from Marylebone. Neil explains how they approached this. “We were always looking for a new home and the move was a way to create something special whilst at the same time reducing the costs involved with being a London based caterer. We created The Shed with a focus on careers rather than jobs and designed the office to create an environment where people felt cared for and supported. Yes, it looks a bit like Google but our focus was on creating an enjoyable, fun and creative environment. We also listened to the guys, feedback from our London team was they would miss the local pub. We decided to do something rather unusual and are recreating the pub in The Shed, even with the same tiles. We want to create an environment where the team can relax and enjoy a drink with colleagues.” 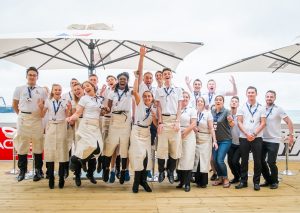 It’s an interesting move from the team who have a wealth of knowledge from both the sourcing and supply side but also front of house and customer facing experience. By fully integrating the approach it has allowed them to try something different. From the transparency of being open with their employees, this has been mirrored with the relationship between clients.

“What is a caterer’s genuine USP today? We are disrupting the traditional model through our approach with suppliers and engineering menus appropriately in Bicester as, we believe, it is the right thing to do for our clients and customers to be as efficient commercially as we can be in these uncertain times. We have chosen a geographical location with easy access all over the UK and into Europe plus near the airports we serve. As well as allowing sourcing to guide our menu writing and whilst matching the client’s aspirations we’re also sharing knowledge on what could work best, using our collective experience. We have the clarity to complete this exciting chapter in our history and there have been challenges, there always are, but our strength is we have a vision we’re working towards which exceeds all expectations.”

On these challenges Neil believes one of the hardest hurdles has been the transition for their employees and that it has been hard to find the time to ensure the teams are adapting to the new space. “Something I personally regret is that we haven’t communicated our message internally in the best possible way, it hasn’t been purposeful, but we have been caught between redefining the business, moving locations and doing our day jobs. We have had a clear vision of brining all of the business together but on reflection I believe we could have been stronger with our internal comms.” A hard truth for any leader to admit but now Neil and team are determined that all employees feel part of the vision and part of the dream. This includes formal feedback but also getting the team together for relaxed drinks, food and fun. It’s all about trust and making employees feel welcomed and supported.

It’s a fascinating approach from Neil and Absolute Taste. With the third kitchen, a mechanical and operative led set up, and the inspiring garden still both under construction, the new HQ has meant big investment for the future. They have looked at the current model in food service and said that just isn’t good enough for them and have an aspiration to achieve more, one which they are well on their way to completing.