Waste Not: Want Not

A Campaign to reduce food waste by 20% supported by

Is this just another campaign for the sake of it? Judge the facts for yourselves.

The figures speak for themselves. There is little doubt that there should be genuine scope for operations of all sizes to make greater strides forward in reducing food waste. Setting aside all the moral and ethical arguments, 18 % food waste from food purchased is surely too high a figure?

This is not a new issue. There is a long history of food waste being identified as a problem. The issue is that more needs to be done. Given all the modern tools at our disposal, this should be more than achievable. 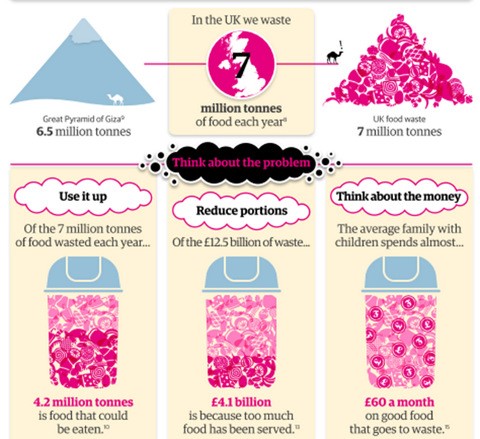 Click on the image to see the full infographic. Source: The Guardian sponsored by Unilever

Food waste was identified as a problem in the UK as early as World War I. Combating food waste was one of the initial goals of the Women’s Institutes (WI), set up in 1915, and remains a subject of their campaigns.

During World War II, rationing was imposed with effect from 8 January 1940 and most foods were subject to ration. By August 1940, legislation was passed that made the wasting of food a prisonable offence. Posters encouraged kitchen waste to be used for feeding animals, primarily swine but also poultry.

Despite this, it remains debatable whether the waste campaigns and rationing, during and post WWII, achieved any long-term change in people’s attitudes towards waste; WRAP’s report on domestic household waste found older people to waste as much avoidable waste as younger people. The rising amount of food waste over the years could also be attributed to a change of lifestyle – for instance the buying of produce which has a shorter shelf life.

By the late 1990s, things had worsened, and the food manufacturing sector was estimated to be generating over 8 million tonnes of food waste annually. A documentary in 1998 revealed tonnes of edible food being discarded at a Tesco store, provoking a renewed response on the issue of food waste. In 2000, the government created the Waste & Resources Action Programme (WRAP), a government-funded, not-for-profit company that advises on how to reduce waste and use resources efficiently. In 2007, WRAP launched the “Love Food, Hate Waste” campaign and returned food waste to the forefront of the news and public agenda. Two years later, the “Love Food, Hate Waste” campaign claimed to have prevented 137,000 tonnes of waste being sent to landfill and saved £300 million.

Progress has been made but there is still more to be done. The big difference today is that the industry does possess the technology to manage the process that much better and to be more effective in the way the production of food is managed.

The counter argument is that this would hinder the creative flair of chefs and brigades which is understandable but surely it makes sense to maximise revenue and cost savings if only by reducing food waste by the above stated 5%. Surely 18% if too high?

This would not be tolerated in most disciplines so why not with food? There is a strong business, moral and ethical reason for change.

We just all have roles to play.

If you are interested in pledging your support to this campaign or attending the Waste Not, Want Not event on March 4th please contact Arlene McCaffrey