Today she is General Manager of Conrad London St. James but this should come as no surprise for Beverly Payne. She was destined to always work in the hospitality industry following two captivating moments in her childhood.

An advocate of nurturing talent, supporting the next generation and a core founding member of the Malmaison team, Beverly shares the incredible highs and grim lows of the life of a hospitality leader.

Fate may have played its hand early on in Beverly’s life when her mother was stopped by a traveller who declared that her child in the pram would grow up to work in hotels. An unusual occurrence none the less but only a few years later Beverley would see a picture of Inverlochy Castle and seal her destiny.

“I saw that famous image of Inverlochy Castle and just knew that hotels were the life for me. I can still remember feeling the goose bumps on my arms when it happened.” Beverly explains when recounting her early years. “I grew up in a household where no one worked in hospitality, but everyone was very warm, welcoming and brought together by food. From the age of 12 or 13 I was set to work in this world.”

Its a heartening story from Beverly who has grown an impressive reputation as a leader in the industry who believes in nurturing talent. Today when one visits her London property they will find a young team who are having to develop in a much faster world. For Beverly her early years in the industry were shaped at Gleneagles at a time when they achieved five AA Red Stars.

“I hold amazing memories of the beautiful Scottish property and went onto my first General Manager position at One Devonshire Gardens. Here I worked closely with legendary entrepreneur Ken McCulloch and we become one of the first Town House Hotels outside of London.”

“I was there for just over five years and had many unique experiences. From being asked to inject an orange for a celebrity who was recently diagnosed as a diabetic and wanted to see how the needle worked to a renowned artist who never used phones and instead shouted. I also discovered just how fortunate General Managers are. I used to be regularly sent Odeon cinema tickets for openings and to this day never knew who sent them.”

Beverly shares a time when she was in her early twenties and had to deal with an incredibly tough situation.

During this time at One Devonshire Gardens they also won a Michelin star with Andrew Fairlie. It was his first star. Andrew, who sadly recently passed, is just one of the great industry characters who Beverly credits as a joy to have known and work with. Others include Peter Lederer and Patrick Elsmie. However, the standout inspiration is Ken McCulloch, who Beverly credits highly.

In the mid-nineties Beverly became Operations Director and a Founding member of the Malmaison team. “We were in a small team with Ken who was wonderful and 99% inspiration but also 1% destruction” she jokes. “We were creating something new and exciting in the hotel industry and really were daring to be different.” 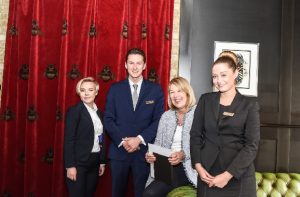 Beverly admits life and the industry has changed since those days and believes guests travel differently today. “I don’t believe the pace of life has ever been this fast. What this means for hotelier is that we have to be attached to our guests and employees all the time and form strong relationships.”

Beverly shares a time when she was in her early twenties and had to deal with an incredibly tough situation where she had to collect a baby who had died in the night. “The father was on his own and his older children were in the room, so he had to hand the baby over to me. We have to deal with difficult situations all the time and we are so close to many sad times in people’s lives. I asked myself if someone in their twenties today could deal with that situation, and I’m not sure how they would.” 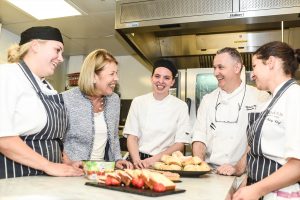 This is an example of the lows that the industry can bring but Beverly is one of those leaders who will ensure her teams can deal with tough situations and she ensures that the highs are also very much celebrated. Beverly stresses the importance of culture when it comes to the highs in the hospitality world. For her, it’s imperative to foster career development and, in the operation, to provide the right level of guidance in order to create an environment where the team can flourish. “We need to allow people to be themselves but within a workable framework where they know the support is there.”

Working across a number of exciting businesses, Beverly is also proud to be a founding member of HIT Scotland which helps drive her passion for talent development into the Scottish hospitality industry.

From those very first encounters Beverly has been on a stimulating journey through the industry and remains resolute in her belief in the ability of the young. With leaders like Beverly the industry has a strong future.