The cheque was handed over at the official opening of the Grenfell Gardens at Crowne Plaza London Kensington, created in memory of their neighbours who tragically passed on the 14th June 2017.

For those within the hospitality, the industry is a unique environment as it is all about serving people without which, the sector simply doesn’t operate. For those outside and looking into the industry, their perception may differ from the reality we all know. They may not see the friendship, warmth and openness but just the business side of the industry which binds us all.

If one were to look for news on the sector, they may sadly see negative news stories first. Admittedly newspapers and TV broadcast are often filled with disaster, corruption and incompetence, with some psychologists arguing this is because people are drawn to depressing stories. So the industry and those businesses within it, must work harder and harder to ensure the truth shines through. This is where collaboration and collectively working together has so much positive impact. This is what the cooperation of West London Hotels association and Greater London Hotels did in the summer of 2017. 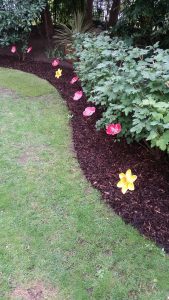 Just over one year on guests gathered at the Crowne Plaza hotel for an emotional unveiling of the Grenfell Garden, created in memory of those who passed. The garden has that unique atmosphere where one can visit and find peace within the busy capital. Dotted around the border are 72 poppies and daffodils for each of the lives lost from the tragedy.

In a touching speech by Edward Bracken he spoke of the friendship developed with the Grenfell United Committee and in particular Nick Burton and Shahin Sadafi. Representing the survivors and bereaved families of the Grenfell Tower fire, they are working together for the community and campaigning for safe homes, justice and change. Nick Burton’s wife Pily passed away earlier in the year and as the hotel had become Nicks second home in many ways, they unveiled a plaque in her memory along with a pink magnolia tree.

It’s a special touch and its moments like this where one truly sees the power of the hospitality sector. They are supporting Grenfell United Committee who are determined to make sure change happens so a tragedy like this never happens again. The gardens are a place for calm and for those who wish to visit, it’s a place for reflection on something which impacted the whole country.

The hospitality industry is special, and we must always praise those who do more for this community and society at large.