Over the last six months, in partnership with Penshee, EP have been hosting a series of round tables with industry leaders to define What is Great Service and to reach a consensus on what must be done to achieve it.

The debates have attracted great interest across the industry as the topic continues to grow in stature along with the collective recognition that service is becoming increasingly important in the modern fast-paced world. However, how will it evolve? What are the key areas of focus and change? And what do we mean by the term “great service”?

Another thought provoking debate took place at the fourth Great Service Debate at The Goring Hotel in London. 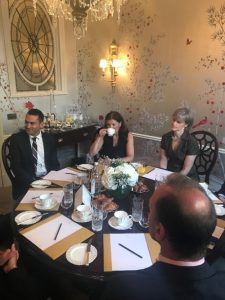 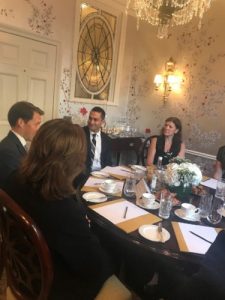 Not for the first time, the session opened with a healthy challenge to the very definition of service, and the question of what was more important, ‘service’ or an ‘experience’. Our debaters seemed happy that service was seen as a sub-set of an experience. It was also suggested that ‘great’ service perhaps prompted us to think of memorable and exceptional moments, but whilst this might be true, it shouldn’t be the sole focus. Great service was the ability to deliver the everyday and seemingly routine interactions with consistency and in a manner suited to the individual guest.

The Battle of Quotients – EQ vs IQ

The difference between IQ and EQ (Emotional Quotient/Intelligence) was brought to the table, and it was contested that it is EQ that takes the lead in contributing to the end experience through emotionally intelligent leaders and teams. The question was posed: “But isn’t EQ a fixed set of traits that can’t be learned, you either have it or you don’t?”. Not at all, in fact unlike IQ which is essentially fixed, EQ is malleable and can be learned and developed, assuming the right culture and leadership.

“If you work on EQ, you will then create an unusual and special experience”

This morphed into a long discussion on how important it is to create trust within the team of how an operation’s leaders view service. This was particularly topical, given a wider issue on trust across all industry sectors and some concerning supporting data – globally 63% of employees don’t trust their leader (Forbes Magazine referenced from the Edelman Trust Barometer 2017). Given this background, it was fascinating to hear the attendees talk about the importance of culture and trust within their businesses.

“Without trust, it is unlikely that service will be exceptional”.

This led to significant exchanges, woven in and out of the two-hour debate over how much freedom should and can be given to teams. Some argued that it is very important to set boundaries and clear guidelines whilst others argued that one has to just free the team to act as they see fit and to trust them. Another stated:

“Never underestimate your team. They know.”

Generally there was consensus that by over-enforcing a framework, personalities became oppressed and ‘experiences’ became more process driven and robotic. Perhaps the balance was to create a framework within which personality is encouraged to flourish. Anecdotal reference was given to reinforce this point; A restaurant where a fabulous experience was created by an attentive waiter who quenched the thirst of the guest, and her colleague, who ‘charmed their pants off’.
“Often mistakes are made when a team member feels unable to make the right decision and this leads to poor service. They need to feel that they have the right to make the decision that they see, in that moment, as being the right one.”

For the fourth consecutive time, Pret a Manger took momentary center stage in the debate as a great case study and model where the front-line teams feel able to provide great service and be effective. It took most of us by surprise to hear that Pret teams make the ultimate decision on new recruits, having spent time with them at the counter on their trial day – if they don’t fit, they don’t get the job. Perhaps it is not so simple to apply to all avenues of our operations, but the point was made that if the culture is right, and the teams do feel able to make decisions that they believe are right, then the culture strengthens and the experience naturally rises.

Nobody contested that empowerment, as we understand it, was integral to good leadership. However, something wasn’t sitting comfortably and it was the term itself. It was ultimately agreed that whilst the intention and general interpretation of ‘empowerment’ was positive, in itself the term lacked true meaning and authenticity. Much better to ‘trust’ it was eventually agreed by all.

This naturally led to the question of how leadership directly impacts upon service, how one should empower teams and of course, the discussion over how the millennial workforce are forcing operations to change the way that they act and think. Once again in the series, and somewhat in rhetoric, the question was asked “are our managers (or leaders) present enough in the operation?”.

Another noted that the role of GM had changed from the director – often leading from the front – to the producer – the person responsible for providing the tools and stage for the actors to perform to their guests. Was either right or wrong and perhaps more controversially:
“Could you run a hotel without management?”
A radical concept but the point is that if leaders could free their teams up, the teams would respond and often it is management that get in the way.
In a time where there is such debate over how business is being overly controlled and how the young are responding by opting to be part of the gig economy, it was refreshing to hear how this group of lead operators were thinking differently.

Echoing the third Great Service Debate, an observation was passed that often it is those that are the lowest paid that connect most with customers and have the most impact so why are they the lowest paid and over managed?

Can technology help us?

In the quest to understand and trust our employees and to better connect with guests, what part can tech play?

Social media and real emotion don’t always go hand in hand, but one of our group spoke with feeling about their hotel’s compelling case for the effective use of social media. By not only enabling employees to contribute, but in recognising their work and efforts, employees felt recognised and appreciated and could feel that they were a part of the momentum and vision of the hotel. Using the vast reach of social media in an intelligent and understanding manner can help to make connections and ultimately to enhance the experience for guests.
So the overall conclusion of the session was to stress just how important it is to empower, sorry, trust, and free employees to perform with confidence if one is going to be able to deliver a great experience – and the modern guest wants to create memories and that is how they define a great stay.

One was also left to ponder that maybe Hospitality does stand ahead of UK PLC in so many ways and maybe it is now the opportunity for hospitality to really showcase its great strengths and stand tall. There is little doubt that the incredible design, cuisine and product quality on offer across all avenues of our industry set the foundation for outstanding experiences – so long as the service can equal or surpass this high quality.

The debate will continue in the first week of September, where the Goring will once again open its doors for us.