Are we witnessing the fall and rise of print?

The newspaper industry has suffered declining industry sales and yet new newspapers are still being launched. With many losing valuable time due to busy schedules, is there an ever growing need to disconnect and take in a simple pleasure such as reading?

Is the move to digital a simple cost cutting exercise with the potential for higher revenue? Is the reader still the focus of this move?

It is a conflicting time of various agendas. A newspaper launched only in 1986 is ceasing their print run and another media group are making the move to launch the first national standalone newspaper for 30 years. 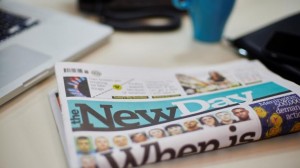 It is an interesting move for both and covers a subject already taught – publishing courses at Yale University focus on this ‘print-to-digital (r)evolution’ and looks at the challenges and opportunities facing publishers. So is ‘The New Day‘ newspaper arriving at the right time?

The argument from ‘The New Day’ is that the shape of Britain has changed considerably over the last 30 years.

Zoe Harris, the newspaper’s publishing director says, “Newspapers aren’t fulfilling the needs and demands of some consumers in the way that perhaps they have in the past.”

Consumers do interact with a newspaper in a different way to how they engage with news online. We are yet to hear the sentence “I going to relax and read the news on the internet”.

How an audience is reached must be continuously tweaked because they are constantly changing. Modern media must change how they approach it. An example this week is ITV who covered the Brit Awards and took over all of London Underground digital screens in the build up to the televised ceremony. They created a cheeky play on Madonna’s cape getting caught in her performance last year. A trophy with a cape begins at the top of the escalator and falls to the bottom and, as it passes across each screen, it says: “amazing live TV is hard to pull off”. ITV may have broadcast the popular awards but they knew this extra activity would raise awareness.

It is difficult to the reach an audience and many must adapt how they approach their consumers. But people will always want and need to relax. A newspaper provides this, it provides a time for information, reflection and intellectual gain. The Independent is an interesting move and it will be wise to monitor the moves of other large papers in the future.

Is The Independent ahead of the curve?

It’s important to switch off, but do you still enjoy reading a printed paper?

Will ‘The New day’ survive and potentially grow?