“Judy Garland, Talk of the Town and other stories”

The Hippodrome in London’s Leicester Square is a building with a colourful history and most recently enjoyed a renaissance as a casino restored by the Thomas Family. During the 60’s and 70’s it enjoyed fame as a nightclub, Talk of the Town, converted by Bernard Delfont and operated as a joint venture with the Forte Hotel Company. It was London’s largest theatre/restaurant offering package deals for guests, including three orchestras, dancing, dinner, a floor show of over 40 cast members and the evening’s highlight – an 11pm performance by an A-list star. Over the years these included Sammy Davis, Shirley Bassey, Frank Sinatra, Tom Jones, Lena Horn and Judy Garland. 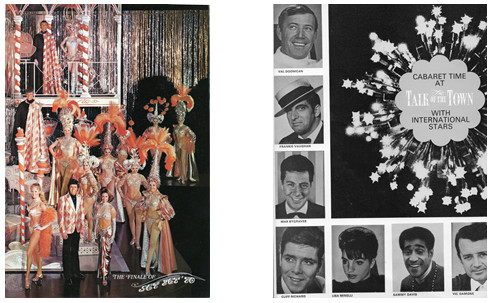 Appointed assistant manager of Talk of the Town in 1967 at the age of 24, Michael was promoted to general manager within six months. As experiences go, Michael has many to share and none is more moving than his time with Judy Garland, who was scheduled to perform over a five week stint in 1969 in what ended up being towards the end of her life – a poignant period since created into a theatre production, End of the Rainbow;

“Part of my responsibilities was to greet stars in their dressing room to ensure they were comfortable. Judy Garland was one of many stars that I met over the years, and Talk of the Town was one of her last performances before her death.

“When I met her she was clearly suffering from the effects of malnutrition and substance abuse problems, but this did not stop her performances which were always phenomenal and had great finesse. Yet, her temperament could be rather precarious, such as one evening when she took our guard dog, an Alsatian, back to the Ritz hotel where she was staying.

“Towards the end of her stint she was due on stage one evening and at 10:30pm had not arrived. I phoned the hotel where it became clear that she not yet left and had made no effort to do so. We were at full capacity, 800 people and I had to decide whether or not to put the curtain up.

“I went on stage around 10:50pm to explain that there had been a slight delay and, other than a little disappointment, it was mostly fine. However, at 11:10pm there was still no sign of her so I had to go back on stage to explain that Ms Garland was having difficulty getting to the theatre – which received a little more restlessness.

“My assistant manager and I then took a taxi to the Ritz and it was clear on entering her suite that she had not made any attempt to prepare to leave. I explained we had 800 people in the audience and asked her if she was ready to do her show? It elicited no response – except for the Alsatian prowling in the background!

“In the end I guided her into the taxi and we arrived back at the club by 11:30pm. We phoned ahead to say we were on our way, and the orchestra had struck up the first overture as we were walking in – and we took the decision that it would be best if she would go straight in stage.

“Despite the clear difficulties she was in as soon as the spotlight hit her on stage she performed – it was an extraordinary – and she remained on stage for an hour and ten minutes. It was so incredible and sadly, within a few days, we lost her.”

“This was an outstanding experience but having said this, every artist that performed at Talk of the Town was always an experience and a half. It was totally one off – artists today can perform at the O2 Arena or the Hammersmith Apollo to audiences of up to 20,000 people and get paid in one hour what used to take two or three months to make in the 60s and 70s.”

At Talk of the Town Michael also had the opportunity to work with theatre operators and particularly the skill of renowned producer, Robert Nesbitt who also did the Royal Command Performances at that time. 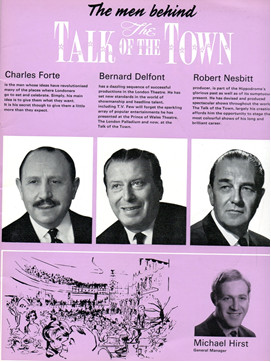 “Robert was a gentleman personified and had a particular eye for detail, which he called the ‘producer’s eye’. He could look at a stage and see anything that was out of place, and that’s been with me for ever more. When I walk into a hotel, I often use my producer’s eye just to see if the stage is set and the ‘props’ are in the right place.

“He also used the same team of people for all of his shows, the same choreographer; set designer, costumier and so on who all intuitively knew what had to be created each time we changed the show. It taught me to stick with a winning team where everyone knows their role – you need a strong leader, but each person plays a different part.”

In the four years he spent as general manager and Director of Talk of the Town, the Forte business used its model for other theatres around the country such as Night Out in Birmingham and Golden Garter in Manchester. “It was the era of cabaret clubs in Northern cities and also end-of-pier theatre shows, with the likes of Ken Dodd and Frankie Vaughan appearing.”

Michael’s career continued to flourish, and he has since gone on to be chairman and CEO of Hilton International, and he is currently a consultant to CBRE Hotels. He has been involved with wide a variety of industry associations, including the Business & Events Partnership and The Tourism Alliance.

Michael learned his craft at the Westminster Hotel School where he attained a HND in Hotel Management. He joined Forte Group as a graduate trainee and initially worked at the Café Royal. “At the time Forte had one hotel, the Waldorf, but then developed the Excelsior Hotels at London and Manchester Airports and bought the Frederick Group of Hotels, which included a young Harry Murray, now Chairman of Lucknam Park, and Brian Langton, later to become Chairman of Bass Hotels and CEO of Holiday Inn Worldwide. My role as a trainee was to induct these new managers into the business”, he laughs.

Within six months of a two year programme, appointed in a ‘proper job’ at the Oxford Motor Lodge, where a young Rocco Forte, who he had trained with in the kitchens of the Café Royal, would drop by for a coffee during his days at Oxford University. However, as a Londoner, and with a small family hotel in St James he did not feel at home in Oxford.

Michael’s uncles were involved in amusement arcades and had operations in venues under Forte’s ownership and were aware that the Gaming Act of 1964 would create opportunities for companies with licensed premises to have amusement machines. He was encouraged by them to develop a business proposal for Forte and submitted a paper to Jack Bottell, Forte Group Personnel Director, outlining a case where the business could generate significant additional revenues. This idea was not only supported by the business, but Michael became the co-ordinator of the project at the age of 22 years old. 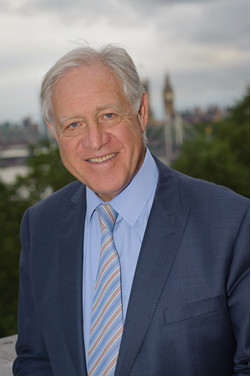 “It was a good way of getting noticed”, Michael reflects, “I think you have to do your job right but also be a little bit different.” Initially appointed as assistant to the managing director of restaurants and licensed retail outlets – James Zuppinger – he later entered the leisure division of Forte. At the time the amusement part of the business was part of the JV with Forte and Bernard Delfont and included seaside piers, leisure centres, amusement parks, Belle Vue Zoo and the Pigalle Club in Piccadilly and Talk of the Town.

“My time at Talk of the Town is all the more amazing given that it started with a proposal for amusement machines. As a young person it was exciting to see the broader opportunities in leisure and hospitality. I think young people today value the experience and lifestyle a career in hospitality can provide, in addition to being able to get into a responsible job at a young age, you have to be prepared to put your head above the parapet.”