Having been set up on a blind date by their respective parents, Kate married James late last year. He, the son of Tim & Stefa Hart, owners of Hart’s Hotel in Nottingham and she the daughter of consummate professional hospitality business operators, there is a sense of inevitability about Kate choosing the profession of hotel manager for her own career. Indeed it could seem “written in the stars” that she should be general manager in a business owned by her parents. However, appearances can be deceptive and Kate’s journey to this point hasn’t been quite so straightforward.

“I think I always knew I wanted to work in hotels but all the same when I finished university I felt like I wanted to do something completely different – for a while at least. So I went to work as duty manager at ‘The 3rd Space’ in Soho” A specialist gym/health & fitness venue offering members expert nutritionist advice and onsite medical support, The 3rd Space is a large, busy venue with a substantial customer offering. “It was a great experience and really quite different from anything I’d done before. I thoroughly enjoyed the years I spent there, but then my brother came to me and said ‘Come on Kate – you’re basically working in hospitality. Why not do it in the family business?’” 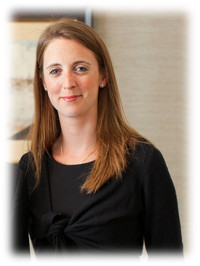 Putting Kate’s professional experience to one side, her knowledge of the luxury hotel market is extensive. Quite literally, she grew up in them! Kate’s father, David Levin, has owned and operated The Capital Hotel in Knightsbridge since 1971 and she has fond memories of a childhood spent living there. “The thing about a hotel like The Capital is that everyone knows each other really well. You spend so much time there that really everyone is family! The guests and staff have been just as influential to me as my parents in a way – I opened my A Level results in the chef’s office. Our Head Concierge, Clive, has a distressingly long memory and was there to witness my questionable teenage fashion choices! My parents became such good friends with two of our regular guests that they asked them to be my Godparents. It’s all just a little family”

“I suppose I could have gone straight into the business when I graduated from University, but I really wanted to try something different first. After a few years at The 3rd Space I felt like I was ready to join the team. I had some “outside experience” from another business, in a different sector. However, it wasn’t quite so straightforward as I was only back in the door ten days when I was ‘seconded’ out to our contract at BAFTA on Piccadilly!”

The Levin family business at the time included a contract providing catering & hospitality services to the BAFTA site on Piccadilly. When a member of the team was forced to leave for personal reasons, Kate was sent in to “hold the fort” for a short time. However Kate flourished in that environment, one which was “part of the family trade, but far enough away from the hotel to give me space to breathe. I also hadn’t worked in conference and events before then, so it was a great place to cut my teeth in that sector” Spending the next few years working her way up the ranks at BAFTA, Kate was then presented with the opportunity to work with George Hammer, Chairman Hammer Holdings. “Working with George was amazing. He moves at such a fast pace and has great ideas in rapid succession, which he wants to make reality almost immediately. The company was already well known for its various beauty and ‘wellness’ products and services but then we were given the chance to convert two Grade listed Churches into event spaces. The churches had fallen into disrepair and needed to be ‘saved’ but there was no way to do that without changing the nature of their use. Naturally there was some ‘resistance’ from various parties that wanted the buildings to remain as they were, however the fact was they were close to being condemned. So, ‘One Mayfair’ and ‘One Marylebone’ were turned into beautiful venue spaces and it became my job to manage them”
“It was an unbelievable experience. We ran some amazing events, and I really learned a lot about the sector but I have to be honest – the hours nearly killed me! After a few years, my love-affair with special events was well and truly over so I decided the time really had come to go back to The Capital!”

It was 2008 when Kate made the decision to return to the hotel she had grown up in. Spending 6 months on a “getting to know you” mission, she then took over the position of general manager and remains there today. “I suppose it has all come rather full-circle in a way. I’m now running the hotel I grew up in and managing a team with people who were there in my youth. So many of our regular guests have been coming back for years, decades even. It makes this a really special place to be and work because we really are a team.”
“I’m still on a learning curve, of course. Harry Murray MBE has been a fantastic mentor to me and has really pushed me to expand my boundaries. The experience of running such a long-standing hotel and a team which has been so loyal to the family and the business is wonderful – but it presents its own challenges too.”