As chairman of Heritage Portfolio Chris Robinson is one of the most experienced operators in the outside catering market. However, his passion for hospitality began as a schoolboy in South Queensferry…

As a 10 year old boy Chris first realised his entrepreneurial instincts at Hawes Car Park in South Queensferry. Day visitors travelling to watch the ferries would park their cars at the rail bridge and he would greet them with a grin and haversack charging six pence for parking. “It was probably a bit cheeky but it was a nice little earner”, he laughs, “But that’s when I first realised I had the ambition to do my own thing and earn my own living.”

Chris has since gone onto to forge a hugely successful career in outside catering, currently as chairman of Heritage Portfolio which received a Royal Warrant in January. He is also a lecturer at a number of Hotel Schools in the UK and USA, an avenue that he has followed since starting his first business in 1978. However, his early career in the Scottish hotel market hones his craft and management. 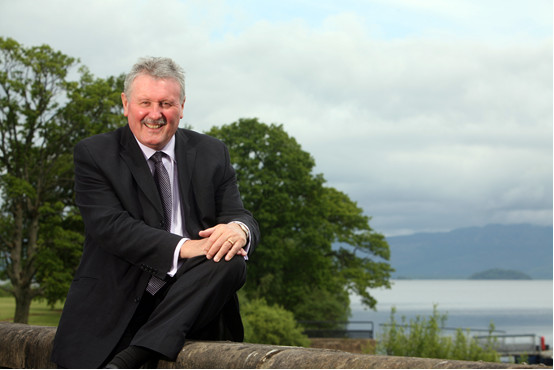 After leaving school he had a summer job with Usher/Vaux hotels where he worked as a trainee which led a trainee management role at The Golden Circle in Bathgate. “There was no training programme in place and the prevailing approach at that time was to put people into the different departments. However, the lack of training meant I never felt like a manager,” Chris observes. Whilst the experience confirmed that hospitality was the industry he wanted to be in, he decided to undertake an Ordinary National Diploma at Napier Technical College (now Edinburgh Napier University) as it was then known. “This would have been a two year course”, says Chris, “but I was fortunate to meet with Professor Hamish Davidson who convinced me to go for the Higher National Diploma. It was a key moment as he became one of my closest mentors.”

On leaving college Chris worked at the Open Arms Hotel Group for five years during which time he was fast-tracked to work on outside catering. During this time he also ran the Howard Hotel in Edinburgh which had significant financial issues to the extent that the bank had asked the business to find a buyer. During this time Chris managed to turn the business around;

“My first three months were spent showing prospective buyers around, but I could see that the real issue had been poor management. So I worked to maximise bedroom sales, putting a new booking system in place, and eventually during the summer months we were at 105% occupancy. I also had to chase debts from travel agents to pay staff wages, which as a 28 year old manager was quite challenging. But the great thing was that I learnt if you show leadership and are prepared to stand up for the things that matter, your team reciprocate.

“I was then asked to become a director of the business and have a five percent share of the company. However, what I had achieved at the Howard was the catalyst for me leaving as it gave me a lot of self-confidence and I wanted to do my own thing. I reasoned that 100% of nothing was better than what was on offer and decided to take the gamble.”

Wheatsheaf Catering was established in 1978 and became one of the first premier outside caterers in Scotland. Over 18 years, the business hosted events that included the Glasgow Garden Festival, the European Summit at Holyroodhouse and many others where the Royal Family was in attendance. Chris smiles at his Friday evenings during the summer when he would make a point of attending between 8 and 10 events taking place at the same time. “I would have a starter at Stirling Castle, main course at the National Museum and dessert at Hopetoun House, and made my presence felt quite strongly with all of our clients at each event.”

During this time Chris also took on a role as a part-time lecturer at Napier Technical College (now Edinburgh Napier University) for 20 hours per week. “It was interesting to do this alongside running my own company, but great fun. In fact, relearning some of the techniques I had studied also helped me in the business and the two were quite complementary.”

It was during the latter years, prior to Wheatsheaf being sold to Gardner Merchant in 1996, that one of Chris’ team won the catering contract with Hearts of Midlothian FC whilst he was away on holiday. “As a supporter it was interesting to be in this position, as I had spent many frustrating afternoons watching the team! However, an opportunity came up to acquire a controlling interest and I began a rollercoaster experience at the club.” As chairman and chief executive of Hearts, Chris spent 11 years running the business which included rebuilding the stadium over a four year period to comply with the Taylor Report, and managing the expectations of fans and commentators alike with regards to their position in the Premier League.

“Financing a team to manage the expectation that it could compete against Rangers FC was an almost impossible task. After four years we won a major competition – the Scottish Cup – which was a huge achievement as the Club had won nothing for nearly 50 years. But I didn’t enjoy the limelight and the fact that I became a piece of public property. As an entrepreneur I had never been driven by being a popular leader, it was about doing things the right way.”

Approached by former Wheatsheaf directors in 2002 about setting up a new catering business, Chris became chairman of Heritage Portfolio in February of that year. The company has gone on to win numerous awards and industry respect, with contracts at The Palace of Holyrood House, The Royal College of Physicians, National Gallery of Scotland and the Scottish National Portrait Gallery. On the experience Chris reflects, “I have enjoyed being able to use my knowledge and experience to work with the talented team we have, and am very proud of what they have created. My role is not as hands on as with Wheatsheaf and I’ve enjoyed letting people develop their own ideas and talent.

“There is a lot of complexity in events and there have always been the challenges of thinking outside the box to create a unique occasion. When I think about the depth and breadth of the fabulous events I have hosted over the years there are a lot of good memories – the Garden Festival and the excitement it brought to Scotland in the 80s and 90s was quite something.”