Most of us have no control over when or where moments of inspiration will come. For some it’s in the shower, whilst dreaming or at the gym. For Benjamin Wilkins, it was while going home on a bus. He had been trying to figure out alternative living situations for a friend who had problems getting a mortgage. It occurred to him then that buses have a great amount of space and that with some basic work could be converted into a living space. That ride home was the beginning of Sustainabus, Ben’s social enterprise in hospitality.

From early on Ben was used to building and fixing things as being part of his responsibilities. He became the man of the house in his family at a young age and always took care of any repairs. His uncle was a tradesman who dealt with electrical systems and plumbing. Ben would spend part of his adolescent summers with his uncle learning the trade by observing and then practicing. “At 18 I bought an old Volkswagen Golf that wasn’t running and fixed it in my spare time. It was a fun challenge and getting to rebuild and repaint it was something I enjoyed. I’ve always liked being able to fix or improve things as it has been part of my life.” 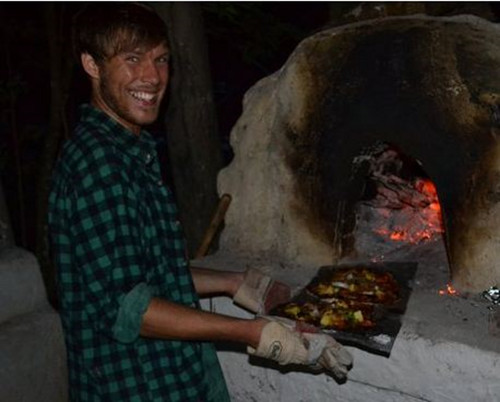 While tinkering around with cars or machinery was a fun hobby and even a passion of his, when Ben went off to university he didn’t choose engineering as his concentration. Instead he enrolled at Sheffield to study philosophy and psychology that supported a Pilot’s Scholarship he was interested in from the RAF University Air Squadron. Ben’s dream then was to be an RAF Search & Rescue pilot but funding cuts early on in his university career made him realize that opportunities in that field were dwindling and that his field of study . He then transferred to Oxford-Brookes to study Osteopathy.

His time at Oxford Brookes has been anything but typical. In 2010 the university created twenty four plots on a piece of land where they encouraged students and staff to grow their own fruit and vegetables. Ben was so successful with his allotment that he won a prize for his gardening. Part of the prize was being sponsored by the university to go and volunteer with One Water Foundation in Malawi and teach gardening, how to develop market gardens and kitchen projects to small communities. Upon his return an article in the local newspaper ended up landing him a job as Head Gardner on a private manor just out of Oxford. He took a break from his studies and spent a year in this position, only recently finishing at the end of last year.

Following the lightbulb moment he had on the bus earlier this year, Ben realized that his idea could be modified into a social enterprise in hospitality. Sustainabus converts decommissioned buses into renewably powered guest houses. The eco bus guest houses will operate on off-grid sites, utilising independent on-site energy, water and waste systems. He aims to provide a hospitality destination that is carbon neutral demonstrating that a green lifestyle need not compromise convenience or comfort and, more importantly, provide guests with the opportunity to engage with the project.

Sustainabus will operate as a not for profit organisation, where all profits will fund the ‘Sustainabus Trust’. The trust will provide highly subsidised or free renewable energy solutions for local community centres and buildings. Ben has a good team in place to accomplish this – Lewin Appleton-Fox, the co-founder of Sustainabus, has just completed his Masters in Renewable Energy and Built Environment. There is also a composite engineer and a marketing major in eco-tourism. Sustainabus already has 10k of funding in place through a mixture of grants and personal funds. They have a lease on 5acres of land north of Oxford and hope to start converting their first bus in early September.

Ben is an inspirational social entrepreneur who hopes to positively affect the hospitality industry with his not for profit enterprise.