In his latest blog he talks about the weeks before the beginning of the race. He is due to set off from Tower Bridge tomorrow on September 1st, 2013. 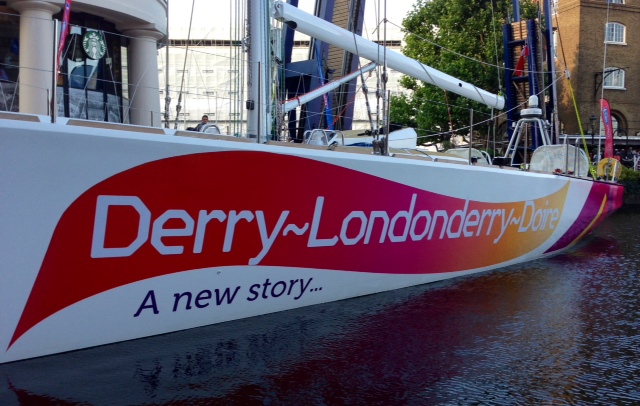 Over the last few months the challenge of racing a yacht around the world for the next year has become slowly ever more very very real. In between the regular hard race sailing & training I have now packed my home & land life away into storage, sold my car, transferred my mail to a PO box address and completed a final family & friends ‘farewell tour’, during this most asked casually ‘see you again before you go?” To which almost always I had to reply a quite emotionally difficult ‘no’. Time is now so very precious, and every moment is already taken with last minute tasks and race preparations. I still find some irony in this feeling, as escaping time pressures such as this was one of the motivations for me agreeing to compete in the race in the first place!

Packing for a trip around the world

Selecting what to pack has been an interesting process. Just how does one pack for a year away, touching down on six continents and sailing through all of the world’s tropical storm zones in full storm season, across the blazing heat of the equator twice and into the iceberg limits of the southern oceans? Each time I have sailed recently I have trialled some the information researched and fine-tuned it further. Here’s the simple version of how the packing now works for me:

The progressive layering of clothes for varying temperature and sea state, basically builds into a single wardrobe, which technically one could wear all at once. Everything close to skin is Merino wool, which apparently does not smell after extended wear (I’ll let you know!) and everything else is either goretex or ‘tech’ materials which fast dry and wick sweat away. Add to this a pair of goretex shorts, a few extra socks & underclothes, one set of ‘shore clothes’ (double vacuum packed for deep dry storage aboard) then extreme weather boots, lightweight deck trainers, ocean weight foul weather kit and a dry suit. Then the most amazing sleeping bag ever, fully water proof, with three removable layers, breathable and lightweight. This was the second most expensive item of kit I purchased, but given it is effectively my home for a year I reckon it is worth every penny! Finally, my one ‘luxury item’ – a very full iPod. Music is the one and only opportunity for any form of escape from the manic work and constant loud noise going on around you 24 hours a day on board and for any chance of your own time and escape in such close quarters. So that’s it, my entire world now reduced down into just over 16kgs. All neatly separated, packed and labelled into small and very strong fluorescent orange dry bags. 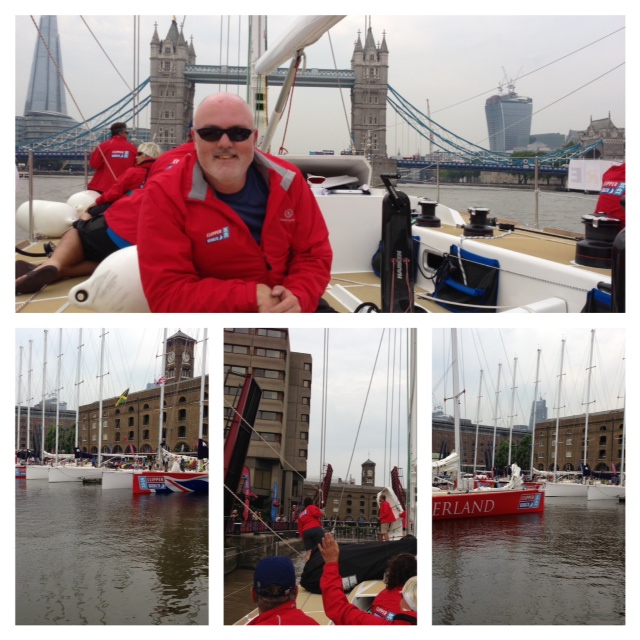 It is quite hard to describe the massive mixture of anticipation, fear, excitement and emotion, the impending departure sense which now fills my thoughts. I actually stopped listening to music a few days ago as I was feeling emotional about leaving friends and family behind, and facing some of the risks associated with what we are about to undertake. Everybody in the race team is pretty tired and weary after our recent offshore training and boat prep (during offshore race training no-one ever sleeps more than 2-3 hours at a time) We are hoping we can achieve some brief respite in London pre-race start. However, with the final boat prep, sponsor and media requirements facing us now in St Katharine Dock, I suspect this will be quite difficult. None of us has escaped injury during our final hard training sessions. Cuts, grazes, aches and bruises from the constant and sometimes hard knocks one collects, and a couple of broken bones in the team already too. One of our sailors was hit in the face and floored by a flogging reefing line only this morning. This brings home to us all the dangers of the race and helps us focus the mind towards collective safety whilst aboard.

Starting a new job, a new school or even getting married produces these kinds of feelings and an horizon in such a mixture too, but nothing on this scale have I experienced ever before. I was at the finish of the 11-12 round the world race and I watched some emotional scenes as crew returned home and were greeted by family & friends in an extreme version of that scene in the airport from the film Love Actually. I wondered at the time what this might feel like at race start and right now I am getting my first real taster of this! My parents, without whose support I could not compete in this race, are coming to the start. I have arranged their hotel and for them to escort the parade of sail on the Thames and under a raised tower bridge aboard one of our official race support boats. With the hindsight I now have today, this was such a wise move, as I really don’t think I could hold it fully together on race start day if I saw them and said goodbye once again.

We have all trained really hard for this, and I do feel like we are ready to race. I have qualified for my Yachtmaster Ocean as part of the training and I had to work and study really hard for these qualifications, which makes them even more valuable to me. The team are an amazing group of people and we continue to learn and work really well together. Our skipper, Sean McCarter is a delight to work with, such a gentle Irish soft manner and attitude, but with a steel fiery desire to push harder and win some races. I am really looking forward to this like nothing before and I still consider myself extremely lucky to have been given this opportunity.

As I write this, we have a little under a week now before race start day; we have just arrived in central London, at St Katharine Dock, for a week long race village. The race village will be an amazing sight all 12 boats polished up and ready to race, the world’s media, sponsor entertaining and final crew briefings before we start under Tower Bridge on Sunday 1st September at around 13:00. We shall return to Tower Bridge for the race finish sometime towards the end of July next year after 40,000 miles and circumnavigating the world, I wonder how it will feel to be back?

Our boat – now officially named after our sponsor “Derry LondonDerry” has performed fantastically well. We are really happy with her, it was a tough last few weeks getting her finally race ready, and whilst in London next week we still have very much to do to fine tune her. Early trial race results are great; she has performed fantastically well and appears to be fast and well balanced. Only time will tell if we can make her a contender in the race. Team Sean has been evolved into “Team LegenDerry”.

I will continue to write news updates from the races and post them back when we stopover in port, the first one from Rio when we arrive there in early October and Cape Town early November.

For more information on initiatives run by EP or to get involved with the community please contact Nicole.thompson@epmagazine.co.uk