On 8th February EP hosted the first in a series of Leadership Talks in central London. The main speaker for the first was international rugby player Schalk Brits who gave a fascinating insight into leadership and culture – of both his Premiership club Saracens and native international team the Springboks.

The event, which included drinks, canapes and networking was sponsored by IndiCater and Sanlam UK. Both companies believe strongly in the need to listen and learn from other cultures and industries and in bringing the world of Sport and Hospitality closer together. 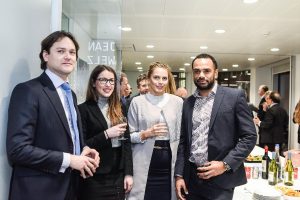 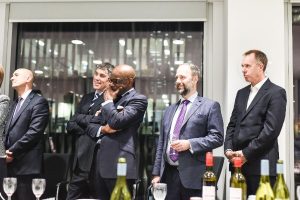 This year EP is holding a series of informal talks on leadership with the focus on sharing knowledge and engaging core topics. It is no secret that Hospitality businesses and indeed other industries are struggling to find talent and that there is a lack of emerging leaders breaking through.

The aim of these events is to start looking at other businesses and industries and to learn, to go beyond the model and broaden thinking and exposure. This can be of huge benefit to individuals and businesses because it goes beyond everyday work and home and can make a difference on a number of levels.

This first talk was attended by a collection of people and businesses from hospitality, sport, finance but also other industries who are interested in this activity. The evening included fascinating insights from Schalk who has had a very successful career since arriving at Saracens in 2009, arguably redefining the very position of hooker with his all powerful game. He has also announced that this is his last season with his intention to further his career and studies in accountancy. What resonated with the room was his honest explanation of the culture and team ethos Saracens has instilled and all members live by.

Schalk places culture and team at the forefront of some of the success he has achieved whilst playing, as well as alluding that this may have also helped shape him personally and his many years at the top.The culture instilled at the club is that all members of the team (players, front and back of house) are equally important, that success is not measured by results but by energy levels and output, that failure is exciting and important to embrace as it brings teams closer together as all carry the responsibility equally for that failure, from the player to the manager to the kit cleaner, that everyone has a voice and everyone has a equal right to be listened to and that it is about making memories with friends not trophy’s in the cabinet!

Leadership is important in business and in life – we would argue that one has to go beyond the model to be truly effective and impactful and going beyond the model is now necessary. Broader minded people exposed to different thinking, cultures and conversations make better professionals, better leaders and better team players.

View the Photo Gallery from the evening here

To find out more or if you would like to attend our next discussion please contact lauran.bush@epmagazine.co.uk