“Look up for spiders and down for snakes”

Under blue Belgravia skies and back in the luxurious comfort of the Goring Hotel, the scene was set for the third Great Service Debate of 2018. Industry leaders gathered again and, fuelled by some potent coffee, it was time to address the debate’s two key questions:

What is great service?

How do we achieve this across our industry?

Our experts brought a wealth of experience:

Keep it simple
Michael kicked things off with a wonderfully simple and incontestable two minute declaration that the delivery of great service (distilled here) involved finding ‘nice, decent human beings and training them’. He acknowledged a potential naivety in the statement but as a principle, the group agreed wholeheartedly, to the point of considering curtailing the debate inside five minutes!

Thankfully, we continued and the initial tone was set for a strong pull towards the simple fundamentals of hospitality. Robert reflected on David Taylor’s decision to bolster the Edition’s lobby with four employees – each prepared to offer a pro-active and warm welcome and to provide absolute reassurance for guests. Michael relayed a dining experience where the main course of the last of his guests was delayed. Sure, it was on the pass and only one minute behind, and the waitress knew that. But as the host, he did not, and for that minute was ill at ease. Why is this small detail so important? Because we must remember to put ourselves in the shoes of the guests at all times. Empathy and understanding is key.

Beverly reminded us (not for the first time in the series) of the notion that ‘errors’ in service delivered by great people, were less negatively impactful than the opposite.

Know thy customer
If we are truly putting the guest first, we must also look to understand them. Seth spoke of his transition from large scale restaurant chain operation to an independent outlet where in answering his own question “how can I run this place better than last year?”, he established a culture of knowledge sharing – teams communicated clearly and effectively about their guests and their preferences. Thus guests were treated as individuals because their habits and preferences were known, or discreetly sought.

On a larger scale, Beverly rightly looked further into the future. “Do we know what the guests of the future will look like and expect?” If we don’t continue to ask these questions as an industry, we will always be on the back foot. She added; “We must not be afraid to break tradition.” 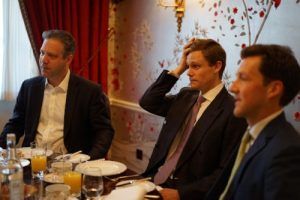 Changing Roles
Jannes made us all ponder when he asked why hospitality professionals end up spending less time in front of guests the more senior that they became. Surely those skilled in human engagement were better placed in the operation than in an office? Should administrative roles be shared with junior employees to empower them and involve them more in the business? Most importantly, this will allow leaders to be out on the floor, setting the example, delighting guests and relieving pressure on junior staff. Michael drew on Jeremy King’s presence within Corbin and King’s outlets and the huge impact that this had on the culture of the organisation and ultimately, the experience of the guest.

People not Processes
Another recurring theme in this year’s debates has been a general disapproval of over-reliance on standardisation and process. Robert implored us (the industry) to stop processing our guests and to remember their individuality. We must put the customer first when creating SOPs, rather than exclusively thinking about operational efficiency and economics. 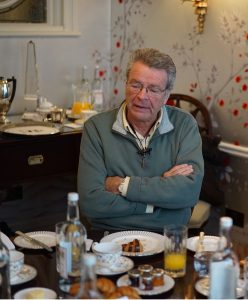 Michael explained that on transitioning from the travel industry into a restaurant operation, he was at first overwhelmed:

“On my first day my boss left me the keys and went to China for six weeks, during this time I learnt how everything operated and then spent some time codifying what I’d learnt and writing it down in human language. This was the principles and the why – like a drummer maintaining a beat as the music is added.”

From an education point of view, Seth explained that he looks to bring experience to the classroom and then to codify it with theory.

Michael also recalled the flexible guest focused approach at a favourite London restaurant, the Enterprise on Walton Street. If a guest arrived at 4pm (the restaurant closed at 3pm), they would be invited to have a coffee at the bar (probably ‘on the house’), rather than being turned away. True hospitality epitomised?

Jannes agreed with this approach but suggested that to actually deliver a highly personalised service was harder than to simply adhere to standard procedures – certainly from a training perspective. Surely a question of leadership, which we returned to later on.

2 – How do we achieve this across our industry?

Culture & Purpose
The word ‘culture’ threaded through today’s conversation, and Beverly expanded to stress its importance. For her, it was imperative to foster career development and, in the operation, to provide the right level of guidance in order to create an environment where great service flourishes. “We need to allow people to be themselves but within a workable framework where they know the support is there.” 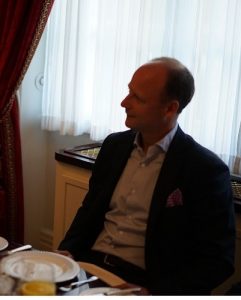 Anthony concurred and added an elevated perspective. “Organisations must have an authentic and clearly communicated purpose.”

At his own organisation, this was fundamental and the group were inspired to hear that at Bennett Hay, employees could volunteer ten hours annually to a charity of their choice – aligning with the company’s purpose and mission.

Jannes bolstered this part of the debate by saying:
“It is essential to empower and trust your team but it’s equally crucial to always show why what you’re asking is important.”

Leadership & Communication
The right culture needs the right leaders. Robert felt that it was becoming rarer to see senior management in restaurants and hotels and that their presence was so important not only to manage the service, but to lead by example. Michael added that a good maître d’ “acts like a hawk in a restaurant and gives guests the feeling that nothing could go wrong.” As the conversation evolved, consensus emerged that service will thrive where there was a combination of strong leadership and clear communication of purpose – the ‘why’ behind the operational ‘what’ and ‘how’.

Transparency was a fundamental part of this communication process and Robert shared an example of such consideration when running a restaurant – sharing the P&L on a monthly basis meant that employees felt more in touch with the business as a whole and could also see in real terms the cost of their activities to the business. Drawing on his experience at Four Seasons, he also made reference to the great Isadore Sharp and his instinctive drive to communicate the values and purpose of the business at every step. If there’s any doubt about the success of that particular approach, stop any Four Seasons employee and ask them about their purpose as a company.

It was felt by all that hiring the right people can make all the difference but this is always easier said than done. As well as empowering staff to not be afraid to report members of the team who aren’t pulling their weight or being a team player.

Returning to the earlier theme of flexibility in service delivery, it was agreed that a truly customised guest experience required leaders who were able to see the human potential in their teams, were willing to let them flourish, and to recognise the desired behaviours.

Beverly informed us of the young leaders group at her hotel. Junior staff are given the same problems to solve as the senior leaders. At the times they can be very impressive and recently this included submitting one of their projects to the wider group.

Storytelling
Storytelling was also cited as a way to achieve great service. Robert used to train his teams with a story from a national park in Australia. “During walkabouts we used to look down for snakes and up for spiders.” He applied the same story in the briefings to encourage his teams to be alert and aware.

A stance on engagement that has become a story in its own right, is that of Nordstrom. Their welcome handbook for new starters goes something like this:

“We’re glad to have you with our Company. Our number one goal is to provide outstanding customer service. Set both your personal and professional goals high. We have great confidence in your ability to achieve them.
Nordstrom Rules: Rule #1: Use best judgment in all situations. There will be no additional rules.
Please feel free to ask your department manager, store manager, or division general manager any question at any time.”

Technology – the great divider
For the third successive debate, the use of technology in delivering great service split the group. Various points of view were presented on successful tech implementation, but were invariably off-set by examples where it would be a hindrance, annoyance, or simply not appreciated. The question was asked: “with home entertainment systems as they are in 2018, why do cinemas continue to thrive?” Because there is an appeal in the collective human experience.

A swish iPad to control all elements of a hotel room (and stay) might seem like a good idea in the boardroom but if guests would rather use a remote control, have a printed tv channel list and to call up for toothpaste, then the ‘old school’ options must still be there. Once again, it’s a question of returning to the shoes of the guest – are we implementing technology for us, or for them? When Robert ultimately suggested that technology could enhance service delivery, but never replace or deliver ‘great’ service, nobody disagreed.

So it was on that final note that we reflected back on the debate with a great deal of positivity. For today’s group, great service would appear to be the delivery of simple, authentic human interactions which are customised to the individual customer. These interactions would be supported by a highly present, flexible and empowering leadership team who work alongside their teams towards a strong purpose. Oh, and let’s not forget, we’ve got the right ‘nice’ people through the door in the first place.
The next stimulating and purposeful debate takes place on
Thursday 5th July 2018.

For more information and to register interest please contact ben.butler@epmagazine.co.uk