In the 18 months that she has been in place as chief executive of The British Hospitality Association (The BHA) Ufi Ibrahim has made significant steps in bringing the profile of the hospitality industry to the forefront. This is especially true in terms of bringing the industry and Government together, to work more closely and to build a better future for UK plc.

At this morning’s forum Ufi spoke eloquently and concisely on a number of topics which centred on the importance of hospitality to GDP and the possibilities for the future of international tourism.

Ufi was quick off the mark in delivering her presentation and got straight to the facts – some of which made for uncomfortable listening, but most of which gave food for thought.

The hospitality sector is the UK’s 5th largest employer with 2.4 million people directly employed in the industry and contributed a Gross Value Added (GVA) of £46 billion in 2010. It is estimated that the sector will contribute circa £36 billion to the British GDP this year.

Taking all this into consideration, looking at the undeniable facts and the contribution that hospitality makes to the British bottom line, why then as a sector are we not more powerful in influencing Government decision making? Why is the hospitality voice not being heard?

In the course of her presentation Ufi referred back to The Travel & Tourism Competitiveness Report issued earlier this year, which stated that Governments can “make or break hospitality and tourism success”. She firmly believes that the hospitality industry needs to pull up its collective socks and make its voice more powerful in lobbying Government.

“The tourism industry needs to mobilise its leverage to make its voice heard – we are ten percent of the British GDP, so why aren’t we more powerful?”

In 2011 the UK came in 12th in terms of capital investment into the hospitality sector compared to other countries around the World. Britain spent approximately £8.7 billion on capital investment in 2011 – seriously lagging behind the £84 billion ploughed into the sector in the US; £61 billion in China; £11.6 in Germany or the almost £10 billion invested in both Italy and Spain. Combining this with the loss of contribution to such entities as Visit Britain and Visit England and it becomes very apparent that the sector is not being given the attention it deserves.

Why is this the case? And more importantly why is this issue not being forcefully dealt with by those in the hospitality sector?

One of the key points to come out of this morning’s presentation was that there needs to be a significant change in mind set if Britain is to improve its attractiveness to both the international and domestic traveller. And it is the hospitality professionals themselves who are the ones with the information and knowledge to influence decision making at Government level.

“What’s the point in spending millions of pounds on marketing Britain and trying to attract tourism to the UK, when at the same time we make it almost impossible for people to get here?! Visa applications which are only available in English; airport taxes which are higher than other European counterparts; expensive public transport and – these are all working against us in attracting tourists to the country” 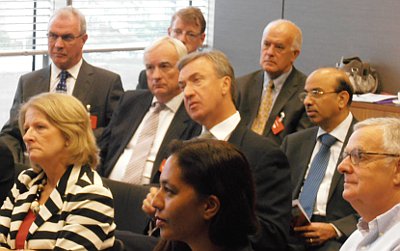 Overseas visitor income is worth £16 billion to the British economy and £8 billion of that is generated in London alone whereas domestic tourism generates £21 billion however only £2.2 billion of this is London-centric. The English provinces, Scotland Wales and Northern Ireland earn over £25 billion on top of the estimated £40 billion annual day visitor spend.

Last year the figures for international tourism into the UK made for unpleasant reading – not least because the UK lagged behind it’s European cousins of Italy, France and Germany but also because the “tourism deficit” showed a £15 billion difference between what tourists visiting these shores were spending compared to the British going over seas.

“It doesn’t matter how many people come into your shop – if they’re not spending money, they don’t count”

According to the UNWTO report, issued just yesterday, emerging economies are set to reach 58% of total international tourism. This should be good news for Britain but the World Economic Forum published a report earlier this year, listing the UK in 7th place behind Switzerland, France and USA. It also showed that save for Denmark, the UK has the highest rate for VAT on hotel accommodation in Europe – 20% compared to 5% in Cyprus; 10% in Austria and Italy and 17% in Ireland. Add this to the fact that the UK is placed at 134th out of 139 countries for airline ticket charges and airport taxes and a clearer picture starts to emerge on why British tourism needs a shot in the arm, immediately.

(It is interesting to note that of the 139 Countries listed, the five which came bottom of the league behind Great Britain were Senegal, Ivory Coast, Mali, Chad and Timor-Leste!)

International tourism from emerging markets is increasing at a phenomenal rate, and unless Britain acts swiftly and decisively it will be left behind.

International arrival growth is expected to rise to one billion by 2012 and 1.8 billion by 2030 (an additional 43 million each year) By 2030 its expected that the emerging economies will account for 58% of total international tourism – this is a significant shift considering European travellers accounted for 63% as recently as 1980. And again, according to Visit Britain, arrivals to the UK have essentially flat lined at 29.9 million arrival in 2009 whereas arrivals worldwide have steadily and dramatically increase over the years to circa 900 million last year.

“ A clear vision, a joint plan and unified action leads to competitive success for local and UK plc”