Food has become a major debate in the UK amid a seemingly endless mix of PR and marketing to encourage greater food awareness. However, with rising obesity and diabetes levels an increasing health concern, John Harris sought to challenge thinking and provoke debate about the UK’s long-term obsession with cheap food and its implications.

At The Business Design Centre in Islington yesterday, John Harris of The Good Eating Company gave a lively discussion about food awareness in UK society arguing the need to raise the bar for educating about food choices and food supply. In what was an engaging session with professionals from different sectors, John raised some interesting questions and provided insights in to the food we eat and what we really know about it.

Given recent problems uncovered in the food-chain supply lines, the case for knowing food provenance has never been stronger. John’s view is that the other big health issues related to diabetes and obesity levels are in indication that a tipping point is being reached, and that food standards and food choices have to change. Processed carbohydrates and increased sugar consumption are particular issues, with increased consumption posing significant long-term health risks.

Despite this, there is still an element of uncertainty amongst the public and a lack of awareness or appreciation of sensible, healthy food choices. In addition suppliers of any food from supermarkets to restaurants are being pushed to offer more choice all the time. Is less food choice a pragmatic alternative? Many consumers expect to have access to whatever food they want at any time of the year and at rock-bottom prices, whilst others prefer their own style of comfort food traditionally associated with UK diet. On the face of it this may seem reasonable or even logical, but at what point do we put ourselves at risk? 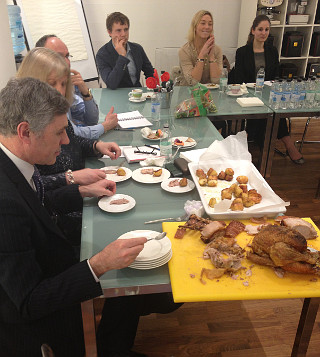 In a time where more people and businesses are “watching the pennies”, suppliers are increasingly being pushed to lower their prices – but at what cost? At what point does it become impossible for the farmer/grower/producer to make a living wage much less a substantial profit if the end consumer is expecting the highest quality for the lowest price?

“Historically people expected to spend as much as 30% of their income on food but that has dropped to 10% – yet there is an expectation that people should still have fridges and larders full of fresh, healthy produce which has been ethically farmed and has never seen a chemical!” 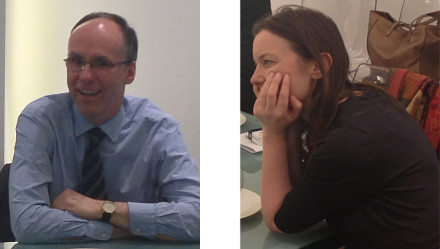 Supermarkets have successfully positioned themselves to say to the consumer that their products are the best quality but also the cheapest. Many people believe them almost without question, but what about the supplier at the other end? Was it almost inevitable that we should end up in the situation we’re in with regards to the horse-meat scandal?

John’s presentation was informative and thought-provoking – and filling as he completed a delicious tasting-session throughout the afternoon. With roast organic chicken and free range pork to sample along with salads, potatoes and raw milk John asked “Can you really tell the difference?” The fact is, you could.

John Harris is a consummate foodie and knows as much about food provenance as one person could. He contributes a regular blog entry to EP which is available to read here

For more information about these events please contact Arlene Tobin at arlene.tobin@epmagazine.co.uk