Do we do enough to develop leaders?

The argument is that the education system is not teaching the life skills fundamental to leadership – so businesses needs to be prepared to step in.

One of the on-going debates of the last decade has been that few have emerged as genuine new leaders. Still the Industry is dominated by names that have led since the 90s. It is high time that new leaders broke through and took on the mantle.

There is no doubt that the industry boasts a generation that has remained in key board roles for the longest period in history. However it is not their responsibility to leave the stage but it should be a natural evolution that pushes at those at the top and, when the opportunity, arises replaces them – but there does not appear to be the depth of talent pushing to take on the key lead roles.

Maybe there is a need to take a step back and think differently about the problem – to find new solutions and ideas? Talent is talent and there is some exceptional talent in the market but it is clear that more needs to be done in order to support the development of new leaders. Could it be that the base foundations for leaders is not the same as it used to be and so the system is the problem?

In September (2016) a new research report by the National Citizen Service noted that:

In contrast, 63% of business leaders say the best young employees are those who have developed skills and interests outside the classroom and over half (55%) would like to see more young people take part in structured youth programmers to help them better prepare for the workplace 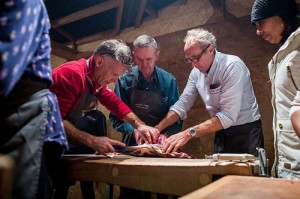 The above suggests that the education system teaches intelligence, but maybe not life skills nor leadership. Leadership is not just about insight but emotional intelligence, values, principles, vision – things that require life skills. Long term success is about character as much as skill. So if the system will not teach these, can business step in? Can business create new coaching schemes to nurture potential leaders?

Leaders have always held a unique position within British history and folklore. The British have always warmed to visible, clear leaders and they carry a unique responsibility in not just business but within communities and with families. Success over a long period of time requires depth and respect from others. Respect comes from many sources but one can gain instant respect through being a step above others in how one behaves. This often comes from failure and life lessons.

This is where modern life does make it more difficult than in past times for there are no simple rules anymore. Too much is about grades, schools, skills and not about the ability to inspire others and to show vision or a belief in something greater than themselves – and yet the person that most will recall from their careers will possess these traits. Hospitality has more than most. We are fortunate. It is how we lay the ground for those that follow.

The challenge – and the reason why people do require coaching – is that the art is to combine character with the ability to let skills and talent feel free and be productive in a socially competent fashion.  In today’s world, so many people do not let themselves be free enough to let their talents be productivity. There are so many obstacles to overcome – shyness, fear, and even just a need to try and do what is right and stand out.  The British love the eccentric character and yet the educational system rarely encourages talent to be brave and different. The system asks for people to conform and yet at the same time we ask for the same people to be brave and not conform when it matters.

To be successful, it is no longer about grades but teams. Bringing together multi-talented teams to perform as one. This requires a different set of knowledge. To be successful, it does require bravery as it is not an easy journey and it is easier to opt out. It lies with business to help nurture the future.