Introducing Mark Davies, Managing Director of ISS UK Food Services. The leader at the front of the ISS strategic vision to become one of the true premier leading players in the Food Services Sector. What does he have planned and where do his passions lie?

Mark Davies may be a fresh face to business and industry catering but, if his track record is anything to go by, he’s proven he’s well up to the challenge ahead of him.

Having joined ISS in 2005 Mark has led the company’s Education business to substantial growth. His passion for great food and service excellence has resulted in significant commercial success and now, in his new role, Mark has a vision, propelled by a smorgasbord of strategic solutions and innovations, which is set to see all branches of ISS Food Services flourish.

Earlier this year ISS announced the combination of all current catering operations to create a new operating platform named ISS Food Services. With an annual turnover of £250m, ISS is becoming the major force in catering they have always threated to be. They needed someone to take these reins and drive the business forward. Looking at Mark’s extensive list of achievements, it seemed natural that he was the chosen for this position. His unquestionable passion for creating excellent customer experiences, coupled with his ability to engage his team to deliver his vision, mean that he has the ability to succeed; Mark may have established himself in education but his adaptable, visionary approach make him well-equipped to cover all catering operations.

When speaking to the team around Mark and those that he leads, the word that is often used is inspirational. People like working for Mark because his approach offers success achieved with integrity. During his time leading ISS’ Education business, Mark implemented ground breaking progress in a time when austerity and cuts were at the forefront of people’s minds. He took on a number of challenges because he recognised that he could drive business growth whilst simultaneously supporting the children, schools, families, employees and the industry.

“Mark is open and honest about the fact that he is a businessman and he does need to make decisions which are commercially viable but he also sees that he can do that whilst also looking after people and doing things better.”

Mark played an important role in several campaigns and initiatives which existed to improve child health and wellbeing in England. From successfully implementing the Government’s Universal Free School Meals policy in over 500 schools in 2014, to joining the subsequent fight to save the initiative in 2017 – he championed contract caterers, promoting them as a positive force which was more than capable of delivering nutritious, delicious lunches to millions of children across the country.

Mark’s tenacity was essential for this progress and was further demonstrated by his wholehearted approach to achieving the ‘Food for Life Catering Mark’ across his business. ISS were the first caterers to adopt the accolade, now known as Food for Life Served Here, which has since become an industry standard and has driven a ‘race to the top’ culture within the school catering industry. Mark has been a member of the Food for Life Standards Committee for a number of years and has led ISS to its current position as holders of the most Food for Life Served Here accreditations of any contract caterer in England.

Mark is usually modest about where his strengths lie, but he will point to the strong team around him. His focus is simply on the bigger picture and for many they argue that’s the distinction between Mark and his contemporaries. He is looking at how actions impact on the customer, he focuses on people and experiences, not services. 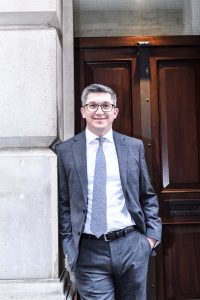 “Over the past decade Mark has been devoted to showing that school food and the people who prepare it are more than just dinner ladies slopping food on plates.”

When asked about the impact he is having, he says: “Moving into this new role I am responsible for markets which include healthcare and business and industry, which is really exciting. I believe caterers should be thinking about facilities as more than just buildings and how our people can help our customers’ people to thrive and succeed. With more remote working, offices need to be hives of activity and centres of excellence which people love to be in and subsequently drive great business results. Focusing on creating excellent experiences every day, whether it’s for school pupils, professionals or families visiting loved ones, is a journey which I can’t wait to be a part of.”

Philip Leigh, Chief Operating Officer for ISS UK, explains how he believes Mark will make a difference, “I have worked with Mark for ten years and what sets him apart is his absolute determination to ‘do the right thing’ when it comes to service delivery, professionalising the industry and investing in talented people.”

“Mark led ISS to be the most involved contract caterer in the school meals industry’s Professional Standards programme.”

The future looks both steady and adventurous with Mark at the helm. “I fully appreciate what impact food and facility services can have on how a person feels and the impact this has on their day. Right now I am focusing on creating service concepts designed to make people feel good and be productive, as well as ensuring our employees feel engaged and empowered.” Mark is also focused on working more with purpose and how the business can communicate with clients about the impact of food and facilities on employee wellbeing and company brand.

With sheer enthusiasm and energy, Mark is looking to the future and focusing on rallying passionate teams who are full of purpose and are dedicated to delivering service excellence. When simplifying his vision, it’s clear to see where Mark’s values lie; he wants to create environments where people can be happy, healthy and achieve their full potential. Why make it any more complicated?