What is #Yolo? YOLO is an acronym for “You Only Live Once“.

At EP we believe that smiling increases productivity and positively impacts the way you approach work and life. This is why, no matter where you are in your career ladder, everyone needs to fill a space in the day with some more (or less) witty humour.
Check out the funniest stories we’ve found on the web.
If you didn’t start today with a smile, it’s not too late to start practicing for tomorrow. 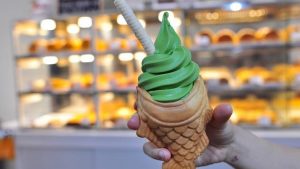 A Chinatown bakery is serving ice cream in a fish-shaped cone.
Taiyaki, which literally translates to ‘baked sea bream’, is a super popular, traditional Japanese fish-shaped cake generally filled with red beans. The summer version has got some beautiful matcha tea ice cream inside! Find out more

What is covfefe?
The tweet by Donald Trump that baffled the Internet.

Amongst others, Donald Trump will be remembered as the first U.S President to expand American English vocabulary.
Just after midnight in Washington, Donald Trump tweeted: “Despite the constant negative press covfefe.” That was it. Twitter did the rest. A few hours after “covfefe” consumed the internet, Trump finally deleted the tweet and attempted to wave it off with a self-deprecating follow-up that simply read, “Who can figure out the true meaning of ‘covfefe’ ??? Enjoy!” We have picked some of the most hilarious retweets. 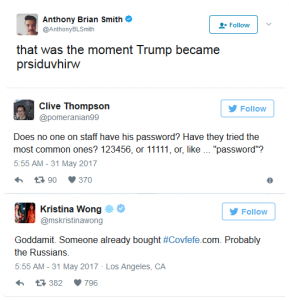