In an era where branding is not enough to dictate success, there is a growing interest for the hospitality industry to deliver good quality products and really meet the high standards that customers demand. A group of 20 leading agronomists recently published a report called “From Uniformity to Diversity” where they analysed what are the most urgent food system issues. Among others, the report found that industrial agriculture’s dependence on chemical fertilisers, pesticides and antibiotics to manage animals and agro-ecosystems, has led to ecological, social and human health crises.

Experts argued that the solution to the currently unsustainable practices is to diversify agriculture and take an ecological focus. The diffusion of organic agriculture practices could certainly contribute to halve the contamination of both human bodies and our planet.
Organic agriculture is a type of certified farming that must adhere to a set of environmental requirements regarding inputs and practices. A key requirement is non-usage of synthetic inputs (fertilisers/pesticides), although mineral inputs from outside the farm that are mined naturally can be applied.

In Europe, organic certification includes requirements for crop rotation. Serious efforts have been undertaken to end agrochemical dependency, yet more needs to be done especially when it comes to cooperation between policy-makers and the industry. 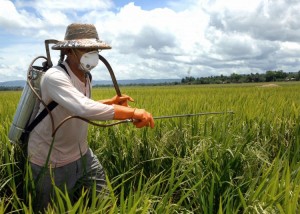 What is at stake? Health, Environment and much more.

According to a 2014 study into organic fruit and vegetables at Newcastle University the quantity of antioxidants in organic food and vegatables, which help prevent cancer and heart disease and boost immunity, are between 19 and 69 per cent higher.  The downside is that organic food needs to be consumed faster so this represents a huge barrier for large and corporate businesses.

What is even more interesting is how the use of chemicals in agriculture has side-effects on the environment that then reflects on consumers. It has been found that pesticides use is the cause of environmental concerns with direct implication not only on the local population but on the industry and the consumer.

Two in every three loaves (+60%) of bread sold in the UK contain pesticide residues, according to a new analysis of government data by environmental campaigners. (Read more)

Yet, countries like France show how pesticides use can have effects on a wider scale.

France in the spotlight: Is this the end of Moules-Frites?

Pesticides in France were sprayed next to homes where vulnerable people such as pregnant women or young children might have been exposed. As a result, recent findings proved that traces of pesticides were found in nine out of 10 rivers and streams in France.  The situation has reached such a high scale that is now putting at stake one of the most consumed and typically French meals, Moules-frites. The Telegraph reported that the succulent mussels simmered in a sauce and served with crisp fries — are threatened by the mysterious mass deaths of the mollusc in France’s main producing region.

The use of pesticides is nothing new. The above-cited report found that the first case of resistance to pesticides was discovered in the 1960s (Gould, 1991) and furthered argued that since then,pests, viruses, fungi, bacteria and weeds have been adapting to chemical pest management faster than ever. An old problem that, in a very interconnected world like today’s, requires new solutions.

EU Referendum: How would a Brexit affect food? A SWOT analysis of the potential different impacts of a remain or leave vote.Find out more

Walmart tests partnership on food delivery with Uber – Walmart customers in the US could soon have their groceries delivered by Uber drivers under a pilot to be announced by the US retail giant. Read more