EP was delighted to host a special Think Tank session at Hotelympia this week. The focus of the session was on the need to improve productivity, trust within business and the development of talent. The argument presented was that there is a genuine opportunity for change if companies both understand the need for change and start to think differently about both their customers and their own teams/cultures. Those present included severn CEOs/MDs, three leading entrepreneurs, key influencers and two former sporting figures.

The discussion was broad and wide reaching but overall there was a consensus on several key factors:

To look at recruitment differently and to look at talent rather than CVs. There was a general dissatisfaction with recruitment process and models and there was an understanding that there is a need for increased focus on finding great talent than a CV process acting as a barrier. Is there an opportunity to almost create industry talent centres that focus on people and talent first? 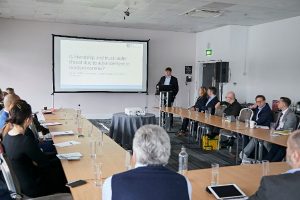 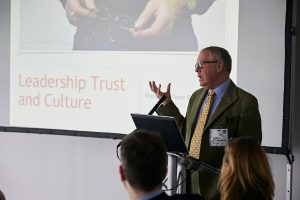 The session was opened with a presentation from Chris Sheppardson, EP who made the argument that business environments were not in the best of health and that both social media and the educational system has changed the psychology of many of the young. Therefore there is a need for business not simply to accept these changes but to create strategies that ensure that culture, engagement and talent development are strong pillars within the business.

Professor Peter Jones, Dean of the eHotelier Academy, presented on the importance of leadership and trust and what factors were of primary importance within organisations for both strong cultures and trust between leaders and teams.

Both speakers talked at length on the issue of trust and how it has broken down – but from differing angles. Chris challenged whether the trust had broken down through a mix of increased pressures on the young and with the rise of social media which had created a more guarded psychology and enhanced fear of failure. Peter focused on the importance of behavioural traits of leaders and organisations which arguably were increasing pressure within difficult markets.

Both though agreed there was a need for change and learnings as the situation was very concerning.

The L&D of Alternative Leaders

During the wide-ranging discussion a core part focused on the lack of trust in leaders that is having the biggest impact on performance. It was argued that once this is broken it is very hard to repair. Peter argued that there are some leaders who are not really leaders because either they have no real ‘followers’, or they are pretend leaders who have been selecting to manage. Are leaders being forced to respond to the KPI’s and external pressures rather than focus on their customer and play an influential role in the business?

Many agreed that teams used to have more fun or indeed had more interaction in comparison to today and the growth of digital communication channels. Has social media become a barrier and makes people more guarded because the world is more transparent?

A point made in the room was that their influencing leaders were “old school” whose behaviour is what is now considered ‘tough love’. An argument was put forward was this was because they only had passion for the customer and the customer’s experience. Another point was that because society has changed, this is now deemed a dangerous leadership approach.

The argument was made that if social structure was stopping the development of the young because the school system puts too much pressure on them to achieve grades rather than becoming rounded people.

Can the Sporting World Support

An interesting point from a former top-level sports player was some of their best team talks were from the other leaders within a club. So not always the leader ‘of’ but the leaders ‘within’ who were empowered by the opportunity to lead.

Many sacrificed their academic studies to focus fully on their sport and these individuals retire with high quality soft skills, resilience and other effective abilities but struggle to find work. They are not aware that these talents are special abilities that can be utilised in the Hospitality industry.

An Idea – Hospitality and the Community

Following the session a thought from an attendee:

“In the UK there at least one (if not more) Four Star hotel in every town and city where there is an NHS Hospital. My experience of the NHS is they are largely very good on medical bit (where they have enough staff) but they fall down badly on the “hotel” side of things…cleanliness, food etc.

How about we get Senior Government, maybe via BHA/UK Hospitality to allow hoteliers in the UK to “adopt” a hospital and spend say a day a month looking at their “hotel” operations and find ways to improve things/cut costs etc.”

Thank you to Hotelympia and eHotelier