The Great Service Debate – Part One of Six

Is it too much to hope that the UK hospitality industry could reach consensus on a definition of great service, and better still, consistently implement this to become the indisputable global leader?

EP and Penshee collaborated to bring together players from across the hospitality sector for their inaugural session of the event series; The Great Service Debate. Over a roundtable breakfast discussion, the room discussed and debated two core questions: ‘What is great service?’ and ‘How do we achieve this across our industry?’ Five further events will be held throughout 2018 with a full report of the findings published in quarter four.

The attendees’ backgrounds for the first event were diverse, with representation from hotel general management (Sheraton Grand Park Lane & Bermondsey Square Hotel), corporate hospitality (Coutts Bank and Bird & Bird), consultancy, business development (Searcys) and directorship at the All England Tennis Club. The breakfast session was chaired by Giles Gordon-Smith, Founder of Penshee, who brought his experience from hotel operations and expert consultancy in emotional intelligence.  EP and Giles would like to thank The Goring Hotel for their kind support in this series, the surroundings and accompanying service certainly befitted the great debate.
Here’s how things unfolded.

What is Great Service?

Within a few exchanges, the word ‘personality’ had recurred several times, with our Irish attendee describing how service in Ireland was generally delivered with a greater character. All agreed that the diversity and quality of culinary offerings was high, but that they were likely to really remember an experience (and return) when the service was delivered with appropriate personality. 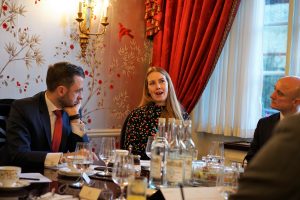 It was fascinating to hear from someone who regularly sits on judging panels for various renowned service awards. He commented that there was frequent debate amongst judges over whether to commend ‘quality’ (efficiency, dexterity and precision) versus those who were perhaps less experienced in this respect, but were able to engage on a more personal level and with great passion.

Mariana summarised this particular exchange effectively in stating that for her, it was about finding “the right balance between mechanics and emotion”.

The discussion over personality progressed naturally into one of authenticity. “We condition our workforce too much sometimes” and as a result, lose authenticity suggested one. When individuals are told what to say and how to act, this not only creates an unwanted roboticism but can impact the morale of the individual. 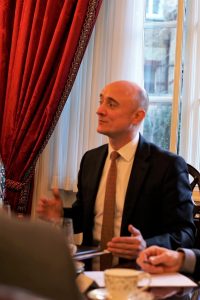 When sharing great service experiences, Martin argued that simplicity was impactful – anecdotally referring to a recent stay in a hotel.  The telephone operator was empowered to answer and action all queries – meaning that your call will never be transferred. An experience where a guest is required to make less, or no effort is surely a good thing. Kieran bolstered this by saying that they made it their job to predict the guests’ needs. If the guest had to ask for something, it was a fail for them as a team.

Were we to create a word map of the debate, one of the most prominent would be ‘care’. When an individual intrinsically cares about the experience of the guest, the chances of that experience being a positive one are greatly increased.

Nobody questioned that the trait of empathy was crucial to delivering great service, but consensus escaped the experts in concluding what could be done about those individuals with low (or no) empathy. In an ideal market, operators could ‘let go’ of those with lower human skills, but of course we don’t presently have the luxury of an extensive potential resource pool from which to be choose. Can empathy therefore be improved? 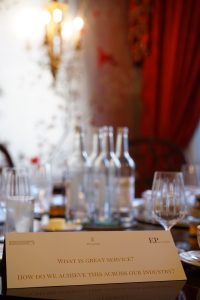 had been about the act of service, and not much time had been given to the resultant impact on the guest/customer. The diversity of the work environments (from highly discerning private bank clients to those treating themselves to a special hotel stay of afternoon tea perhaps) prompted the table to address the fact that of course great service to one guest, could be inappropriate or irritating to another.

How do we achieve great service across our industry?

With a general consensus on what constitutes great service, it was time to discuss how to achieve this. Sara opened up with a passionate speech on how we were falling short on so much of the above as an industry, but came back to the point of simplicity – that what we were asking was not overly complex or challenging.

There was complete agreement that change is needed, but that genuine change was not an easy thing to achieve. In fact, a pivotal point of the debate came when details were given of a potentially impactful incentive at a hotel. Employees were actively encouraged to give away free afternoon tea to guests checking in to the hotel – partly by way of looking to combat a cyclical slide in GSS scores during January. However, a few days into the incentive, not one tea had been given away. This brought about a point crucial to the debate – expectations at executive level are one thing, but implementation is quite another. However simple and effective to implement they might seem, the conditions must be conductive for front-line employees to feel empowered and comfortable to deliver. It was suggested that as an industry, the solution may lie in greater and sustained staff consultation. We don’t consult front line employees enough.

Given a consensus that personality was essential to delivering great service, there were concerns that over-reliance on weighty and overwhelming standards manuals (a 600 page manual was referenced) are likely to inhibit this. This is not to say that processes are not important – it was agreed that they are – but that they should serve as a foundation only. As a significant bi-product of a personality driven service experience, the industry becomes more attractive both to the customer and for potential recruits.

One attendee highlighted that “Around 5% of our Housekeeping department don’t have a great level of English so we train them on the job in simple language lessons.” An example of how effective allocation of budgets can not only help to drive standards but also improve retention. This sparked a bigger point – that funds are so often misdirected, and employees end up under-trained and lacking in confidence. If we’re serious about service and people, we must think very hard about where we’re spending money.

There was some discussion about the current perception of the industry and an impassioned plea to think big in terms of using main stream media, industry leaders and even government to assist with an attractive portrayal of hospitality. Stephane reminded the room how much (appropriate) fun there was to be had in our business. Concerns were raised that whilst a PR campaign (such as the current Armed Forces TV campaign) might bring more folks to the door, it would continue to be a revolving door if cultures in our businesses were not generally improved.

So much of the preceding debate relies on nurturing the right culture, and the group agreed that everyone in an organisation had a role in this respect. Particularly though, leaders had a responsibility to lead by example – acting in line with the company values, and praising and rewarding demonstration of them in their teams. 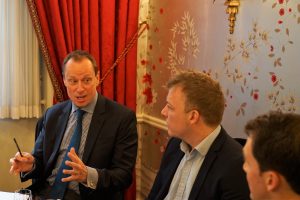 The role of technology

Numerous technological advances were cited and after some interesting and conflicting opinions were expressed, it was suggested that there was indeed a role for technology to play in the delivery of great service. Fabricio rightly addressed a potential technological barrier ahead in the form of new data privacy regulations – after profiling guests will become increasingly fraught with difficulty. Stephane effectively summarised by suggesting that we should look to “use technology well to free up time to focus on the human elements of the experience”.

The interesting but compelling case study of the increasingly successful Metro Bank was mentioned in relation to the sort of new thinking that was needed to drive real change in our industry. Even when it comes to recruitment, it was agreed that there were huge untapped pools of potential stars. The role of a host or doorman, for example was one which relied most obviously on people skills over technical ability. The case of the outstanding doorman, recruited at 65 years young, was presented.

So after two hours of stimulating discussion, are we still optimistic of a consensus? I believe that this is entirely possible, and given the energy and passion amongst just eight industry leaders perhaps more importantly, significant change is well within reach. There’s every reason that great service can be defined but can we think disruptively, build the right cultures of care and create the required changes in behaviour to ensure that we consistently deliver outstanding customer experiences?

The conversation continues at The Goring on 15th March. Please get in touch to register interest for any of the events, and with your insights on either of the debate questions. Contact: Ben.Butler@epmagazine.co.uk