Have we become too narrow in the way we think?

Michael Barton,
The highly regarded chief constable of Durham,
when asked to describe his dream policy

When the Bank of England recently admitted that they had misjudged both the financial crisis of 2008/9 plus the fallout from Brexit, the valid point made was that the thinking of economists had become too narrow. Liam Fox too complained that many in businesses had become lazy. Was it lazy or again too narrow?

It has become a genuine problem that many research projects have highlighted and is affecting every generation and every layer of management.
Together we need to work to alter this and create change. You disagree? Fair enough but consider this:

–              Research published last year noted that too many school leavers and graduates do not possess the life skills required for the work place. They will need development.
–              Middle management and process is slowing down the actions and decisions made by board.
–              The thinking within many corporates is hindered by the dominance of compliance and risk management which serves to take away accountability.

Who is bored now by the use of Brexit as an excuse?
Brexit is fast becoming a dirty word as it is being used to explain every ill in the economy – it is an easy excuse and interestingly, we have seen this used as a reason for lower valuations being offered to businesses with the argument that this is the reasoning of the banks. Fair enough but the obvious counter is the Bank of England’s own admission that they miscalculated on Brexit’s effect on the economy.
One of the reasons that they may have miscalculated is that entrepreneurs are really not being distracted by Brexit. Why not? For a number of key reasons:

1.            They believe in globalizations and beyond Europe – especially with Digitalisation.
2.            They look to the USA rather than Europe for inspiration
3.            There is still no real clarity on what Brexit will look like so this is needed before judgements are made
4.            The last 8 years have had their challenges so SMEs are used to just adapting and handling whatever is thrown at them
5.            By their nature, they are focused on their concept and idea and believe it will overcome all obstacles
6.            Brexit has not really hit the investors attracted to start-ups
7.            Arguably the UK is now one of the digital/technology hot beds for entrepreneurial starts ups and are one of the most positive engine rooms for the economy. Arguably, Britain is returning to its roots- “A nation of shopkeepers” (Napoleon) – and it is the entrepreneurs that will lead Britain through Brexit. 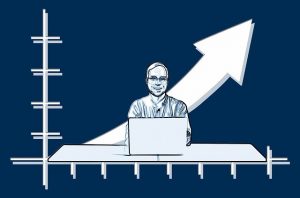 Brexit is an issue for the large corporates. The entrepreneurs will just view it as another obstacle/distraction to overcome. Why can’t others?
Their real success is that they are prepared to find solutions and think beyond compliance and risk. Yes many will fail but many will create change.
The art is in creating a balance

Balancing is difficult because there are so many traps that keep us where we are? Success can also be a trap.  How many businesses have held the future in their hands but couldn’t see it. They were simply so good at making what they loved doing that they wouldn’t change. We are the same, when you know something well it’s difficult to change. Bill Gates said success is a lousy teacher, it seduces us into thinking we cannot fail.

When we think only 1 year ahead, innovation and the ability to renew isn’t so important. But look at the longer term, 10 year perspective and innovation is suddenly very important. Fund the journey and live the long term.

As the world changes at an ever-increasing pace, this kind of problem solving and adaptability will matter more and more. Balancing exploration and exploitation is impossible by oneself, it is a team sport and you need to allow challenge. The mark of a great company is being open to challenge, and the mark of a good board is to constructively challenge. When did you last explore something new last and what kind of effect did it had on you, is that something you should do more of?
Are you prepared to think differently?
Join us to the next EP Think Tank

A journey into intrapreneurship and disruption