The world is changing at such a fast pace, with more and more businesses influenced by political and economic changes. The Middle East has always been in the spotlight and with many conflicts and tensions engulfing the region it becomes difficult for businesses to successfully promote their products and services. Security concerns and lack of trust towards the government and the private sector is hugely affecting businesses in many countries that are dependent on tourism like Egypt.

Figures show the effects of political instability in Egypt and the need to revive growth and create a more secure environment for businesses and customers. The MS804 flight incident comes at a time when Egyptian tourism officials were expressing hope that the sector might be on the brink of recovery.

According to government’s figured, the tourism industry contributes about 11 per cent of the country’s gross domestic product and employs about 12 per cent of the workforce. The holiday industry now accounts for about 3.5 percent of GDP, central bank data show, compared to 5 percent before 2011.

How many tourists did Egypt lose?

Tourist arrivals in the first quarter of 2016 were 40 percent lower than a year earlier. The industry was already suffering its worst crisis in years — annual visitor numbers slumped to 9 million in 2015 from a record 14 million in 2010.

Egypt accounts are not doing great.

Bloomberg reports that the current-account deficit more than doubled to $8.9 billion in the six months to December, as tourism and remittances plummeted. This is just an add-on to a staggering 9 percent annual inflation rate, over 13 percent unemployment and an annual budget deficit of about 12 percent. 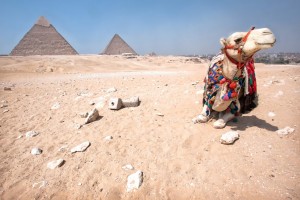 Egypt Hotels Plan Expansion is poor as a result of
political turmoil.

More hospitality news from across the world
Cyclone Roanu to elevate flood threat across India after displacing over 100,000 in Sri Lanka. Read more

Week in pictures: From India’s drought to Syria carnage. Nepal marked the anniversary of the devastating quake while Ukraine remembered victims of the 1986 Chernobyl disaster. Find out more

Tough new laws on smoking and tobacco sales have come into force in Uganda. People lighting up in bars, restaurants or hotels now face being fined $60 (£41) or jailed for up to two months. Read more