He is young but has lived a full life. He excelled at sports, became a top squash player, faced uncertainty after a cliff fall, built a company from zero to £3m turnover in year one and is now an integral part of the ISS Leadership team. EP met with Gareth to discover his story of determination, purpose and ultimate will to succeed.

Gareth believes his story isn’t special. His modesty only adds to the character of someone who simply wants to achieve. In truth his journey is an unusual one and whilst relaxed in nature, his eyes reflect a person who is driven and knows how to win.

EP met Gareth in a London hotel on his return from the ISS Global Leadership Conference in Singapore. The theme of the conference? “Great Together!”

Gareth works closely with Mark Davies, Managing Director of UK Food Services, both are advocates of defining a strong ISS culture. Their emphasis is on the team around them both at home and at work, which transpires seamlessly into the market. Each have such strong stories relating to their development, which deserve more recognition and needs to be told.

From squash courts to the board room

Gareth was always good at sports. When growing up he excelled at many but especially Squash and Rugby. In school he went on tour with the rugby team to South Africa and played in front of crowds of 10,000. In the last game he was subject to an awkward tackle which required medical treatment as his thigh and back were severely damaged. If he were to play on, he would have had serious problems so he switched to focus on squash.

At the same time he was told he could only sit six GCSE’s. The school believed he was capable of more but adapted to the sporting demands. His choice of sixth form college was originally not of his making. He explains, “My sister was a very good national squash player and was seeking a scholarship to Wycliffe College. I went to support her and asked the coach if he fancied a game. After beating him, he offered both my sister and I a two-year scholarship”. 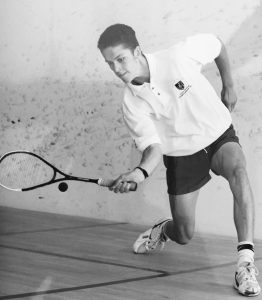 Gareth played in national and international championships and travelled all over the world whilst also looking for sponsorship to finance his playing. This became his first experience of business negotiations and resulted in a successful relationship with a leading sports company. “They weren’t always sure how they could support and when I asked for support with flights, I was offered new tyres for my car.”

Having studied for his A-levels whilst managing a busy competitive career Gareth decided to study Sports Psychology, a course that was only offered at two Universities. When results day came he didn’t receive the grades he needed. But, this is someone who simply doesn’t give up and he made something special happen again.

“I contacted Glamorgan University on the day and explained the situation. How I was a sports player trying to achieve the highest ambitions but also wanting to study hard and improve my knowledge. They asked me to come down, so I jumped in the car and only a few hours after receiving the results, I had a place.”

Gareth played in national leagues and tournaments around the world but needed to fund the activity. He started working for a restaurant and completed a qualification in food and hospitality at the same time.

After gaining his honours degree Gareth had acquired experience in psychology, diet and nutrition, in addition to his coaching skills. His old college Wycliffe asked if he wanted to teach and coach squash in addition to completing their recruitment. “I appreciated that coaching was a form of mentoring and linked the social time that surrounded this individual and team process to development and growth”.

A change of culture

Gareth was by this time a professional squash player competing worldwide. He met an entrepreneur who offered him the chance to manage a gastronomic complex catering for 1,500 people in Switzerland. He jumped at the opportunity and managed a music hall, night club, Irish pub and restaurant. It was great fun, but he was burning the candle at both ends. Sport by day, hospitality by night.

“After meeting with a Swiss squash representative at the FIFA Headquarters, I had an opportunity to focus solely on sport. In addition to competing on the international circuit, I managed and coached international players in both a business and sporting perspective. My non-court time was spent on sports psychology and performance programmes, encompassing a holistic life balance including diet and nutrition. Ultimately it was designed to improve individual and team’s chances of success. All elements were given the same importance providing many with the perfect platform to succeed. The business model was my dream and after four successful years based from Switzerland, I was very optimistic for the future.” 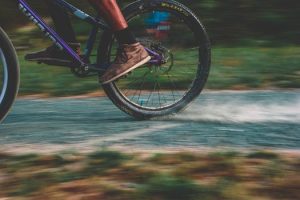 Gareth’s life however was about to take another twist whilst training for an alpine mountain bike race. Gareth and a friend were riding along a cliff edge on a mountain route regularly used by mountain bikers. Gareth’s bike slipped on a rock falling 40 metres on to the only tree on the side of the cliff and miraculously was saved from potential death.

Those hours on the tree must have felt like years for Gareth but he almost shrugs it off as uneventful. During the check-up in hospital he still felt relatively ok. He had a deep cut and his back was torn up, but he didn’t feel too bad. However soon the full force of his injuries was felt. “The only way I can describe it is that once the adrenalin had subsided, I couldn’t even open a yoghurt pot.” An MRI scan showed that Gareth’s hips and pelvis were seriously compromised. If he kept on playing he would lose much of his flexibility and suffer a much longer recovery time. It was clear that his second career had ended.

Not fazed. Today is a brand new day

When sharing this part of his story Gareth is quite content with what happened. He strikes you as a person who simply wasn’t fazed. Maybe because the years have passed or because his determination took him through. He had numerous hip and back operations but sadly he couldn’t get back to squash and at the prime age of 26 stopped playing. His frustration is purely towards not achieving more and feeling he didn’t quite reach his peak. It’s fitting that his motto is “today’s a brand-new day”.

Residing in Switzerland meant the Government provided him with the opportunity to reinvent his career. A special perk from the Swiss to offer support for people who change career due to injury. This provided Gareth with an opportunity to study Marketing and Communications, which he felt had a natural link to psychology and hospitality. However just to ensure it was a bit more challenging the degree was in German, a language he hadn’t completely mastered and therefore taught himself along the way. “Learning the language was harder than the course.” He jokes.

“I made a decision that if I couldn’t play, I would look outside the sporting environment to broaden my horizon.” After numerous unsuccessful job applications he was contacted by a Director of a global chemical company, who he had met whilst playing. “By chance they had followed my story and advised that they had a three-month position for a graduate to manage a new project. I took it and stayed for three years.” His involvement eventually lead the company to acquisition.

During this developing period of career enhancement, Gareth met and married a local Swiss girl Nicole and they now have two young boys. Nicole has been extremely supportive and Gareth points to her unconditional support and involvement as critical. “She provides the foundation to succeed and an important balance in life.” 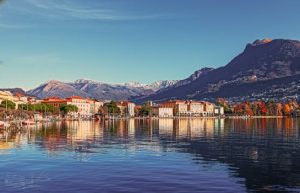 At this stage you would think most people would choose a slightly easier route, but Gareth Morgans is not like that. After a career at the top of the squash game, re-educating himself, going through the frustrating experience of job applications followed by taking a project from nowhere to being sold, he had an opportunity to start a new venture.

“We took a business from zero to £3m turnover in the first year alone.” It was, as the reader might imagine by this stage, another whirlwind of an adventure. “We were able to take the best of my experiences in sport, focussing on seeking and recruiting talented individuals for companies using our services.”

“It was during this time that I met with ISS, where an old acquaintance encouraged me to apply for a position. Everything I had done up to that stage had been about people and that’s what great service and hospitality is all about – relationships. It felt a natural fit.” 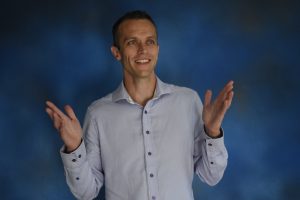 He bases his success in life on his sporting credentials where he had to be inventive and responsive to changing approaches and tactics. “My concern is too many people today are not brave enough to try new things and take risks, too many take the safe option.”

After relocating with the family for his current role with ISS UK, he reflects on the fascinating experience. “I have been building a team that relies as much on talent and attitude as qualifications. I aim to offer team members a reasonable degree of freedom for self-expression within a framework of accountability and responsibility. I am cognisant that my sporting heritage has taught me the importance of trust, honesty and support for individuals and I believe these attributes foster a culture promoted by ISS”.

Despite being a proven winner, Gareth feels it’s more important in that the way you compete is equally important as winning and hopes that he brings this philosophy to the team. “My primary impetus is to give my best and for those around me to follow suit. I give 110% and when we apply this approach to all our interactions, I feel it is what makes the difference. You give people the belief that they can achieve, doesn’t everyone want to be part of something special? It’s an awesome feeling being great together.”

It’s an interesting commentary to end on but Gareth is focused on doing the best that he can with the skills, abilities and experiences he has. He played squash because he loved it and the culture around it. He overcame educational challenges and studied for the degrees he wanted, despite not having all the boxes ticked. He also tried new experiences and started a very successful company. Doing all of that alone is impressive but add in a career ending injury, it still didn’t faze him. Gareth is a motivated individual and ISS should be praised for ensuring he’s part of their team.