If Robin Sheppard had followed his gut instinct, he would have gone into the advertising industry. Instead at 15 he stepped into the ballroom of a hotel and despite an extraordinary first night, he stuck with the hospitality industry and today is renowned for his Bespoke Hotels with its cherry on top, Hotel Gotham.

He feels privileged to have run many fine hotels, created a successful hotel consortium and tried to encourage and inspire others to enter the hospitality industry. He has done all of this with his unbreakable school boy humour and also going through Guillain-Barré syndrome, where he had to learn how to sit, stand and walk again.

“The bubbles in Perrier are too big” was the title of a presentation Robin gave to a room full of Hilton players on the importance of attention to detail. Whilst General Manager of The Royal Berkshire in Ascot, Robin was asked to showcase his approach to marketing. “I had known for some time that this was what I really enjoyed and could have quite easily gone into advertising. I’ve always appreciated creating a brand and strapline.” Robin recognised that Perrier was becoming a ubiquitous term and part of the English language, so simply asked the gaggle of hoteliers, ‘how do you select the ideal water?’

“There was a tall and thin General Manager whose nickname was ‘streaky bacon’. When I entered the ballroom, he was balancing the glasses to create a Champagne tower.”

Robin may have had his first experiences of hospitality at 15 but still managed some stints working on a farm, as a builder and for the Post Office. He recalls his first night in the sector which he admits should have really put him off the industry.

“At a best unmentioned hotel my first shift was a Saturday dinner and dance in the Hawaiian restaurant. One of those where they used to put pineapple on everything. There was a tall and thin General Manager whose nickname was ‘streaky bacon’. When I entered the ballroom, he was balancing the glasses to create a Champagne tower. He had had a few sherbets during the day and was struggling to place the last glass on the top. I didn’t know his name so asked, “Is everything ok Mr Bacon?” and he replied, “Everything’s not f*cking ok, my wife’s ran off with the restaurant manager!” and proceeded to topple backwards and land on a table, hitting his head on one of those heavy stone ashtrays.” Young Robin had to bundle the unconscious manager off and hide him in a cupboard. “As we carried him, I asked, “Does that not mean you’re taking the orders tonight Mr Bacon?” It was around this time panic struck. I realised it was up to me and two ‘ducks’, as I believe they used to be called, had to look after 75 people. It was a sink or swim moment and we most certainly sank.” Robin remembers being asked if the fruit salad was fresh when wheeling the dessert trolley round and replying, “fresh out of the tin” to the non-amused guest. “When I got home to my parents, I declared I’m never, never, never working in a hotel.” 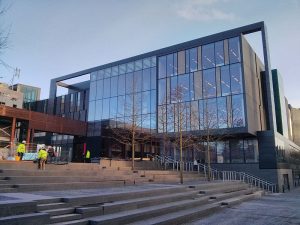 Despite this eventful first night Robin went to work in hotels after studying at Oxford Brookes. It was the beginning of a career in the industry which Robin describes as “the loveliest offices you can work in” alluding to the hotel themselves and to never underestimate the power of where you work, in terms of self-worth.

Robin has run several beautiful properties including The Lygon Arms in Broadway, Bodysgallen Hall in Llandudno and the Old Course Hotel in St Andrews. But it could have been all so different following his first position. After his studies, he worked as a British Transport Hotels trainee at The Adelphi Hotel in Liverpool but on his first night he experienced two deaths. The first was the lead guitarist of the band booked to play that night who suffered a heart attack. “That was shocking, but the second death was a gentleman in his 80s with a lady in her 30s. Both wearing big fur coats, he went to collect the car and when he didn’t come back for some time, I went to check on him and thought it was sleeping in the driving seat, ‘come on sunshine, shouldn’t you let someone else drive’ I joked and quickly realised he was gone. I went and told the lady that her husband had died, and she declared ‘he’s not my husband’ and off she went. It was an interesting first night.” 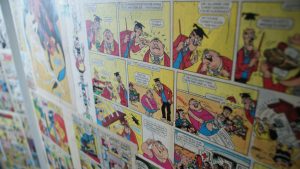 Stories like this are typical of Robin who has never let anything come in the way of his humour. A fine example is where he placed copies of The Beano in the toilets, “Tim Brooke-Taylor once sent me a charming letter praising the reading materials in the loos – especially considering he was laughing at a state when he was most vulnerable.”

After 22 years working for corporates Robin went into restaurants and launched Aqua in Bristol which is still going today. He also embarked on débuting a bottled water company, Tŷ Nant natural mineral water, where he is most proud of designing the infamous bottle shape. “We wanted to have curves to make it as feminine as possible.” Their famous blue bottles are seen on many dining tables following its launch at The Savoy Hotel in 1989. “It was around this time Perrier had to recall all its bottles from the shelves after traces of Benzene were discovered. We became the bestselling water bottle for the next six years.”

Robin was drawn back to hotels and created Bespoke hotels with Haydn Fentum whose family had just purchased Billesley Manor in 2001. “We realised we had an affinity for each other and whilst I look at the top line and work down, Haydn looks at the bottom line and works up.” Robin argues that at the time there was no hero status for hotels, “There was a gap because the likes of Hilton, Marriott and IHG had become operators only, having sold off the bricks. So, we stepped in and were able to manage icon hotels in a soft fashion. Showcasing the individuality of the hotels and their character through a complete management service.” 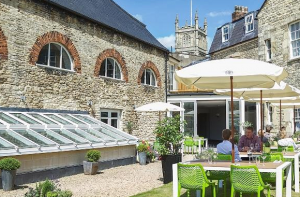 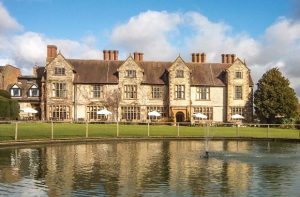 Around 2005 Robin was struck down Guillain-Barré syndrome and had to battle his way back and learn how to sit, stand and walk again. He went through a frustrating experience which still affects him today. 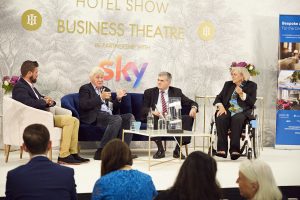 Knowing the limiting effects of disability Robin has become a champion for disability issues in the hospitality sector. He created the Blue Badge Access Awards which holds the aim to recognise venues and businesses with a stylish approach to accessibility, as well as praising innovative and forward-thinking solutions to the issues experienced by disabled guests when travelling.

Robin feels privileged to have been allowed and encourage to set his own path and run some magnificent hotels in beautiful settings. He has had to make some very tough business decisions along the way and is honest by declaring he has also made some unwise choices. “The greatest lesson is never ignoring your gut instinct. No matter how you justify it, it’s always too late.” He believes the strongest word to hold is ‘persistence’ and always looks to get through to the end of next week whilst always pushing for more. 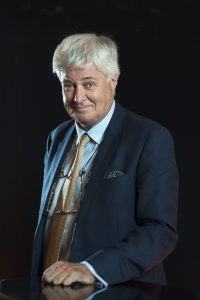 It is this persistence that continues to drive Robin, “If I were to stand on my soap box, I would declare that hospitality is one of the most wonderful worlds to work in. I used to be fortunate enough to travel to Johannesburg every three months and realised that our industry has the most transferrable skills. You can earn decent money, you can travel the world and you can work in splendid and beautiful places.”

Hotel Gotham is one of Robin’s proudest achievements. A property which has had over 90% occupancy spread out over the three and a half years since opening in 2015. This was also where Bespoke Hotels changed tact and realised, they could roll out a defined DNA. This is being repeated soon with other properties in the pipeline.

“There was a reference to the dusting of chocolate on the coffee. The hotel was supposedly making this like a bat. I couldn’t believe it.”

He shares one last story of his school boy charm. “A few months after opening Hotel Gotham and during a time where we were awarded both the ‘Coolest’ and ‘Hottest’ hotel in the same week, we thought best to register the name for protection. Two days before it was to be finalised, I received a letter from an international law firm which declared that a well-known movie company said the name was their intellectual property. I drafted a letter back to them where I argued that the old village of Gotham in Nottingham came from the old English for “goat home” and therefore was an open name. However, before I sent the letter, I saw that towards the end of the huge pile of papers they had sent, there was a reference to the dusting of chocolate on the coffee. The hotel was supposedly making this like a bat. I couldn’t believe it and instead wrote another letter saying that this was clearly an error and that I had had instructed all staff to stop dusting the coffee in this way. They were to, instead, dust out my first name on every coffee moving forward. The lawyers and movie company were so upset with the idea of “Robin” on every coffee that the name sailed through and whilst I offered to explore work together, I never heard from back from either.”