“Actually now starting to think you could put enough GDPR subject lines together to make a whole Adele song.”

“I just got this from the bloody takeaway. Brutal. Didn’t like the chili beef anyway: ‘We are deleting you from our database’”

“I got “you will be removed tomorrow”. A bit harsh”

“I’ve had a very brutal “Anna, we’ve deleted you“, which is a bit the equivalent of breaking up by text when we’ve never been in a relationship.”

“It’s getting quite haughty in my inbox… ‘Don’t blame us if you don’t hear about the latest ticket offers‘ etc.”

“‘So long, farewell?’ from the Austrian Tourist Board…”

“My sons’ charter from Manchester to Kiev to watch the match has been cancelled.

Have you tried the Foreign Secretary?

Sadly he doesn’t have a plane to deploy in this international crisis.”

Liverpool fans share their unique routes to the final

“I am travelling across four countries over four days: Sweden, Latvia, Ukraine and Lithuania.”

“I’m getting the train to Glasgow from Liverpool Lime St, flying from Glasgow to Palanga in Lithuania, then hiring a car to drive to Vilnius airport – about three hours across Lithuania. Then we fly from Vilnius to Kiev”

“I’m taking eight trains to get from Lancaster to Kiev – via Paris, Frankfurt, Dresden, Wroclaw, Krakow and Lviv.”

“I’m travelling from Hanoi, Vietnam, via two stops in Moscow and Minsk to get to Kiev.”

“I get married the day before the final. I paid £1,050 for a return flight that gets back at about 5.30am on Sunday (hopefully), then we go on honeymoon at 9am. The ticket cost £140… and potentially one marriage.”

“I’m leaving Widnes by coach at 9am on Thursday 24th. It’s a 1,750-mile journey and includes a stop-off in Poznan for two and a half hours to change drivers. I don’t have a ticket yet.” 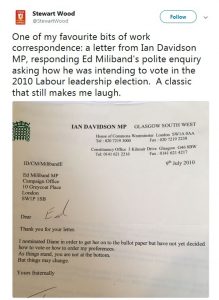 The joy of being an Editor

Editor’s note: This article originally failed to note that all the pictures were of model trains, because the editor is an idiot. Anyway, we’ve now corrected it. Enjoy.

Twitter conversation during which the ghastly truth dawned on the Editor

Chris Sharp (writer of article):
“It’s a terminus on my model railway.”

Editor:
“but… the picture… what… explain”

Chris Sharp:
“All the photos in the article are from my garden railway. I could not be more proud that I got them past you without you noticing.”

Editor owns up with good grace

“I have been tricked into publishing pictures of model trains. Shameful.

Shout out to the frankly wonderful person who decided I needed cheering up and sent a frankly obscene amount of cake to help with the job, though.”

“Yes, I think more people should chime in to acknowledge you’ve been a model of grace in handling all the mockery so far.”

“Come now, Danielle. As mistakes go, it was fairly miniature.” 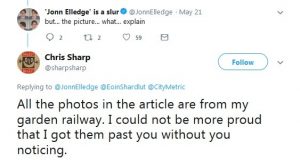