“When I was in school it never occurred to me that hotel management was something I would enjoy. I assumed I was going to graduate from private school, go to University to read law or languages and work in a corporate environment of some sort. I suppose it would be fair to say there was an element of snobbery in my thinking – certainly I didn’t know anyone who worked in the industry, but then one summer I got a job working in the kitchen of a busy restaurant and my ‘life plan’ as it were, changed! I found myself thinking that if I could work in a busy, cramped, hot and uncomfortable kitchen and really enjoy myself, then maybe there was more to the industry than I’d given it credit.” 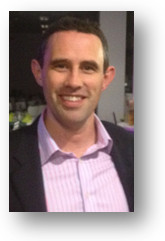 Last month Gareth Banner was unveiled as the General Manager of The Renaissance St. Pancras, a move which sees him return to the fold of the Marriott family. It’s a decision that’s simultaneously surprising and understandable as it brings him out of a self-imposed hiatus from work and back into a company which nurtured him through his early career.

Gareth’s career has never been typical. As he observed in the first moments of our conversation, the hospitality sector was not something he grew up in or ever really considered as a viable career option in his youth. He fell into it by way of a summer job. So impressed was he by that first role that he adapted his university aspirations and by way of the “clearing system” applied to Oxford Brookes to study hotel management.

“It was so much fun! I suppose everyone says that about University, but I really enjoyed my first year studying – and the rest!”

Despatched to Boston in 1996, Gareth took up a position within Marriott hotels which he determines was a life-changing experience.

“American customer-service is second to none. It’s a way of life to provide great service to the client. The year I spent in Boston was career defining for me. I genuinely felt like up to that point I had underestimated the importance of great hospitality. When I returned to the UK I felt compelled to put more effort into my studies and work ethic.”

Having joined the Marriott management training programme, after twelve months Gareth was presented with an opportunity to become “Rebranding Coordinator”. The company had bought some Swallow Hotels and so it fell to Gareth to manage the rebranding process – a challenge which he revelled in.

“It turned into a career move! When I started the management training programme I thought I was on a certain path towards general manager of a hotel, but this was a unique opportunity which exposed me to incredible people and decision makers. The acquisition process meant I was moving all over the country from Inverness to Bournemouth and I saw every aspect of the acquisition and rebranding.”

In the course of his work, Gareth met with Ciarán Fahy, the then-general manager of the Kensington Hotel in 2003. Working together in rebranding the hotel, pre-opening, Ciarán and Gareth developed a close working relationship which Gareth referred to as both personally and professionally gratifying and which would ultimately later lead to Gareth becoming Ciarán’s number two at the Cavendish.

After 8 years with Marriott, Gareth felt the time had come to gain experience with another hotel company, which led him back to Ciarán, who had left Marriott to take up the position of general manager at the Cavendish on Jermyn Street.

“That turned into a really crazy time in my career!”

When he joined the Cavendish team the hotel was owned and operated by de Vere hotels but was almost immediately sold to Richard Balfour Lynn’s Alternative Hotel Group (AHG) and a few short weeks later was sold again to the Barclay Brothers for £100 million.

“It was such a change for me! I had been working in changing-over hotels for so long, but this was completely different as I was still involved in the operations too. Bringing the hotel back from working as a brand to trading independently was a once-in-a-career opportunity. We worked hard as a team, but in the end the hotel became more successful as an independently operated venue than it ever was a part of a chain. We had freedom to make decisions and adapt to customer demands quickly and without interference.”

In 2008 the phone call came through about the general manager’s position at The Hempel.

“Yet another amazing opportunity. It was a beautiful independent boutique hotel and I couldn’t imagine saying no … I started in August and was really excited about the future. And then there was a run on the banks and suddenly everything changed!”

“I could never have seen it coming. I was a first time general manager of a beautiful boutique hotel in Central London who was suddenly faced with really tough decisions. We were driving a business which was trying to cut costs while also maintaining the highest possible standards, but we were doing well. Ahead of the London Olympics we had struck a deal with Nokia for sole use of the hotel throughout the course of the Games which was a lucrative deal for us. Things were looking good…”

It was about this time that the hotel owners received an unsolicited cash offer for the building which was ultimately accepted – a decision which presented a completely different set of challenges for Gareth.

“I had plenty of experience in re-branding hotels and opening and re-opening but shutting down a business was a new challenge entirely. There are legal implications and HR considerations. Of course our team were the first priority but the regular clientele and guests were also important. For me the most important thing was to ensure that the team were given the chance to move on to bigger and better things.”

“It turned out that getting our team into other positions wasn’t too hard. They were a high performing group of individuals, so that wasn’t all that surprising. What was strange was that while it was gratifying to see the team move on to pastures new, it was a little depressing to be closing down the hotel too. It was my first position in charge and I took a certain amount of pride in the hotel, so closing it down was hard. In the end however I knew that the business was just that – a business, an asset. Nothing more. It was good business sense to sell and to give the team the opportunity to move on to other employment or education.”

Since closing the doors to the Hempel, Gareth has taken the opportunity to relax, to make some shrewd investments in start-ups in the sector and to study the market. As he returns to employment, once again with the Marriott group, he is looking forward with high hopes and expectations for both himself and the hotel.

“Getting a job wasn’t the hard part, holding out for the right one was the bigger challenge. When the call came through about the Renaissance I knew it was the position I had been waiting for. A beautiful and unique hotel in a part of London which is seeing huge investment and regeneration. The hotel and the whole King’s Cross-St. Pancras area are a fantastic mix of modern and historic, independent and corporate, new and ancient. It’s a really exciting area and a really great hotel and I can’t wait to get started!”

For more information on all of the initiatives run by EP or to get (more) involved with the community, please contact Arlene McCaffrey