EP hosted a second Think Tank this week on the leading dynamics taking place within the Food Service sector and there were a number of thought provoking conclusions reached:

The conclusion was to do both:

To set up a separate board that will work to create new answers and representation for the sector by the sector.

The Think Tank Discussion in Summary

Distinct difference between catering and the high street

It was argued that catering is all about feeding people but some businesses have given up on trying to feed them on-site (thus the rise of offices with no kitchen’s) because the employee will visit the High Street instead. With no staff restaurant, have some forgotten the importance of a ‘well-fed workforce’?

A question was asked if the industry needs to forge stronger links with other catering operations to ensure a stronger focus – so healthcare, education and even prisons? Would a stronger link between these caterers ensure alliances which combined can hold a real voice for the sector?

Examples were given of banks and the car industry which would come together to solve their industry problems. Both highly competitive but understood the need to collectively come together for the greater good and betterment of their industries. Has the industry forgotten this? Another example was given of private companies whose mission involves ensuring the successful future of the business – legacy.

It was felt that the big players must show the leadership for this approach and the others will then follow. It is in the best interests of all to have a thriving industry. This is especially true with concerns such as obesity and the environment.

It was suggested that recruiting and retention would be easier to tackle should the industry take on the big issues together and stem the churn of people. Would this also impact productivity where the UK lags behind it’s neighbors.

Another argument was the lack of knowledge on what the food service sector actually is needs to be addressed.

Questions were raised on what the industry bodies truly represent and a feeling was made that often the focus is on the ‘sexier’ parts of the industry; hotels and restaurants. It was also suggested that there is a lack in influencing young people on the industry.

Are the big players tackling problems individually? The client demands a change such as the recent war on plastic (especially seen with straws in catering). Caterers are changing to suit the demands but what impact is this having beyond this? If everyone is doing the same, could it be more powerful to combine and make a difference together.

A point was raised that some of the industry only came together for other reasons such as at ACE, Hospitality Action and Springboard. However, each is challenging different issues.

The question was asked if a member of Government could represent the industry’s views. So if the big six companies came together with a combined voice – would this strong presence push the Government in the right way? However the counter was the Government is fearful with meeting individual companies and the example was given of the Olympic bid where the leading hotel groups were brought together because it needed to be a collective effort to win the bid.

Another example was given of McDonalds who reduced their carbon footprint by 1% which had a huge impact on the world. It was argued that this leadership could be effective in the sector and drive needed change. Leaders need to articulate what is right and wrong.

On the Government question it was also suggested that by tapping into their concerns and then allowing them to take the credit, this would help influence their support. They receive the praise and the industry has representation. 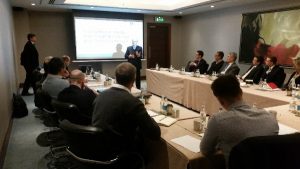 Nurturing the next generation

A stat was made by an older piece of research which cited that of the top 10% companies in the industry, 1% of payroll costs was put towards the development of skills and training. In comparison Germany was 4%.

The point was raised that younger generations don’t always understand the problem and this lack of knowledge is possibly due to hierarchy but the issues being looked at appear to be hard to obtain and understand.

Is millennial behavior hard to understand today for many? One attendee argued that they can see a distinct difference between small age gaps of only eight years. However a counter was raised that this has always been the case with every generation.

Predicting the decline in B&I

It was argued that the client is demanding an offer or concept which suits well-being, nutrition or increases productivity but the counter from some was that the margin is getting narrower. In a competitive B&I space such as London there is at times a ‘race to the bottom’. Another example was given of the representation of the industry where some companies are providing school catering with worrying processes – such as sausages with only 20% “meat content” and incorrect financial models. One attendee suggested this was actually “ripping off” the customer which needs to change. Developing trust with the customer was argued as an essential focus as well as developing trust between caterers.

To find out more about this event series and to be involved please contact Ben.Butler@epmagazine.co.uk