This week David Coubrough’s debut novel ‘Half a Pound of Tuppenny Rice’ was launched at The Savoy in London. With over 100 attendees, David and publishers Peter Owen presented the new novel with David signing copies for guests.

Many dream of writing a novel but few have the discipline and creative drive to do it. David has achieved this and the thrilling novel includes intriguing characters, murder and mystery, which culminates in a startling end that leaves all concerned fearing for the future.

David spent 35 years in the hospitality industry after starting as a trainee manager at the Goring Hotel in London, founded Portfolio in 1985 and has since been a director with Bespoke Hotels, Chairman of The Castle Hotel in Taunton and now Director of Maldon Salt and co-owner of the Beehive pub and restaurant in Berkshire.

During the evening Kit Chapman, below bottom left, owner of The Castle Hotel in Taunton read out an extract, as did actor and writer Elizabeth Morgan.

David’s desire to write the novel came from nostalgic memories of childhood holidays in Cornwall each year and ended abruptly at the age of 18 or 19. He allowed his imagination to roam when asking why they stopped going. He explored the idea if there had been some dark secret that prevented them from returning. This was the inspiration for the exciting plot line. 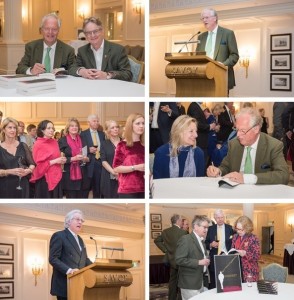