The Changing Habits of Food Consumption

A stimulating breakfast session was held in London at AVEQIA.

This morning EP brought together a group of players from across the sector to discuss and explore how habits are changing in regards to food consumption.

The main take-away points from the session were:

Questions were raised on how we tackle each of these points – do we now need to come together and look further into these issues? For the greater good of the sector and the consumer. 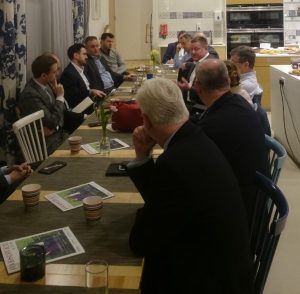 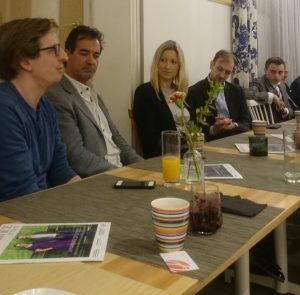 The main speakers from the morning were:

Dean shared the story of Just Hospitality. Born from a frustration, Dean believed there wasn’t something quite right in contract catering in 2005. He decided to shake up corporate office culture and bring catering services back to what really matters – the customers.

Neil has an exciting background and is now in his first Head Chef position. The protégé of Gordon Ramsay, Neil spent time cooking in France alongside the now three-Michelin-starred French chef, Anne-Sophie Pic. Neil bases his menus around seasonal British ingredients and during the morning explored how chefs need to reinvent food and themselves on the front line with customers. Heshared his views on the balance of percentages and how being creative can be prevented by profit margins.

Simon explained how his model is a portfolio of brands and SME’s which are placed in the concession and contract market. For example he places offers in Wembley Stadium which change depending on the demographic. Simon has found that companies are seeking more variety and engagement with SME’s who are able to move at speed and can bring in authentic, passionate offers. As specialist individuals, the customer sees the appeal and can now recognise an ‘untrue’ offer which the caterer has tried to recreate. 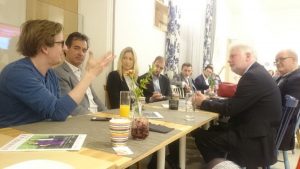 Some of the key discussion points:

Authenticity
Dean argued that the emerging ‘food generation’ won’t put up with a dish that’s not made properly, not sourced right, not ethical, doesn’t add up. If they like a dish, they’ll travel for it, they don’t need a cosy restaurant to eat it in.

Neil argued that people must understand where food comes from. The attitude of “any food, any time of the year” has grown and now people must be educated to understand that food which travels miles isn’t the same taste as a local seasonal ingredient. He believes that food only needs a few very good elements and that simplicity is essential. “If you can teach a chef how to taste without over complicating, 90% of the job is done.”

Simon explained that customers are now asking for more authentic offers and therefore specialists in various cuisines are needed. The caterer now has to satisfy that craving and for those in the corporate space, maximise their restaurant environment.

Paul Vines, CEO at AVEQIA added a question on how do we present authenticity? Simon from Blink answered that from a stadium point of view it is very difficult. Customers often head to the trusted branded offer, especially when they know there is quick service. Simon added that they tried to offer traditional pizza but the oven couldn’t handle the numbers, “It was very popular but couldn’t keep up, the cheese would burn and set the fire alarm off – I was asked if we could make the pizza without cheese!”

Population
The question of whether we have a tiered society was raised. With London as an exception, the rest of the country seems to still choose the burger, pizza or fish and chips. Peter Backman of Horizons argued that people opt for the bog-standard offer – not very healthy and not cooked in the best way. He added that whilst many are moving in the right direction, the mass are still unaware of the healthy options and why these are important.

Exercise in the population was also raised. The average executive exercises on average four times per week but the average person in England now walks 181 miles a year – less than half a mile a day. There is a apparent divide between the two which may grow.

Health
Linked to the above, more companies are suggesting less meat and eating better quality choices. Paul Gardener, Head of Dining Services at Nomura International explained how they have a ‘MOT Gym’ health check. They created an ‘Eat well, feel fantastic’ campaign which is designed to ensure employees are eating the right food and feel good. Their restaurant has 30 choices, but people are now selecting the healthy choices on offer. The work is linked to weight management and cooking classes which help change mindsets and attitudes.

Neil explained how he used to add a knob of butter in a Risotto dish but due to consumer demand the dish now contains olive oil.

Sugar has been a topical subject and the room agreed that educating children is the best place to start to ensure they are aware of the dangers. It was commented that sugar can be more addictive than cocaine. It was noted that the Government is putting pressures on caterers to reduce sugar and they are working to reinvent dishes to include less or include more natural sugar.

Indulgence
It was argued that some people will always want to indulge when they eat out and it was also argued that people would indulge on the weekends when they usually have more time.

Some caterers have completed surveys which state consumers want healthy options when in reality they rarely pick them. It was also noted that people will comfort eat when stressed and with less time in the day due to work loads this may grow. It was also argued that people start the week healthy and end the week unhealthy.

Nutrient, emotion and addiction are strong influences on human behavior. “There is a reason why people choose MacDonald’s which they know is full of fat and sugar.”

It was a stimulating discussion and EP would like to thank IndiCater for sponsoring, AVEQIA for delicious breakfast and space, the three speakers – Simon, Neil and Dean, and all those who attended and added real value to the conversation.