New to EP and new to the UK market, is an exceptional product that has stood the test of time, from the ancient beginnings and mystics of far away lands, from the battlefields of Asia to the shelves of our local shops and restaurants.

Jax Coco, which launches in the UK in June this year, is a 100% natural coconut water, sourced from the finest coconuts from China and South East Asia. It is a refreshing, naturally isotonic beverage, packed with more potassium than several bananas and naturally occurring electrolytes.

Coconut water has ancient origins and is one of the only naturally occurring products that can be transfused into the human body – used as a fluid replacement on the battlefields of South East Asia during the World Wars.

Coconut water is one of the fastest growing segments in the beverage industry. It is the clear, nutty but subtly sweet liquid found inside young coconuts and is a natural source of energy.

In the mid 2000’s companies started packaging coconut water and marketing it as a ‘sports drink’, both Coca-Cola and Pepsi quickly entered the marketplace with their own investments in the industry. 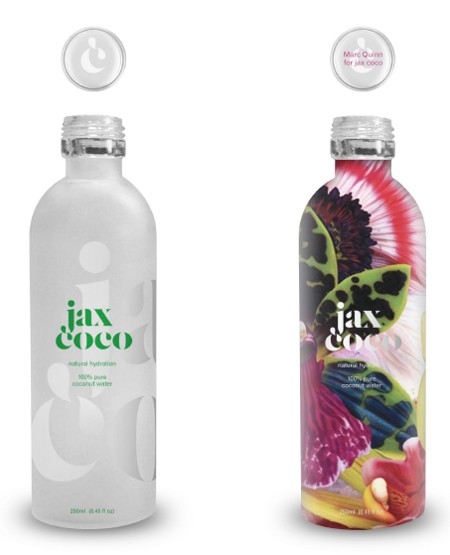 The Wall Street Journal fuelled the speculation and rapid expansion with their article titled ‘ The Beverage Wars Move to a New Battlefield – The Coconut Groves’, and leading analysts claimed that the Coconut Water ‘craze’ is more than just a fad in February 2012.

As such, a window of opportunity exists for Jax Coco to place itself as the pre eminent brand of coconut water in the Far East, where strangely enough coconut water is currently available in just a few packaged products and these are imported into China and Greater China from abroad! And in Europe, compared to current products, Jax Coco will be a sophisticated product with associations towards minimalism and art, the ‘iconic’ Jax bottle will be a feature of the product range, with unique bottle designs being commissioned by artists, such as Marc Quinn, and will also proudly launch the only carbonated Coconut water to the marketplace.

The glass bottles will enable the product to be placed on tables in restaurants as an alternative to bottled water, and in hotels and bars, the carbonated product will be an excellent mixer. Eight iconic Jax Coco cocktails have already been created. The additional option of the ‘tetrapak’ will further enhance the availability and usability of the product for all walks of everyday life.This is coconut water taken to a new level – one of purity and natural sweetness, no fat, no cholesterol and low calorie.

Coconut water is set to become a lifestyle; a hydration beverage that can be sleek, modern and revitalising.