However the photo was soon exposed as a fake. He also didn’t assist rescuers in pulling Harvey victims from floodwaters. The doctored photograph is explained here 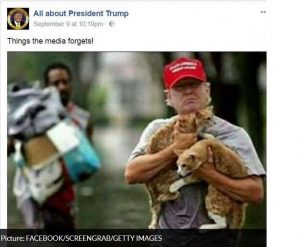 “On August 19th the Times reported that sponsors were threatening to pull adverts from the website. Among them were Confused.com, a price-comparison site, the National Trust, a conservation charity and Bulgari, a luxury jeweller. The organisations are reportedly wary of being associated with increasingly foul-mouthed mothers”

In depth analysis by the Economist shows that the F word is used 400% more than 2009. It is particularly prevalent re relationships and women’s rights.

The Republic of Ireland began their qualification for the 2019 Women’s World Cup win a win this week. Megan Campbell was the star of the show and both goals in the 2-0 win were a result of Campbell’s throw-ins.

They now want to enter these into the Guinness Book of Records.

Simon McCoy‏ tweeted:
IT WAS FOUR YEARS AGO, PEOPLE! FOUR YEARS!!!! MOVE ON. I AM TRYING TO.

“Are you getting a ream of abuse…?”

“Tell them to turn the page.” 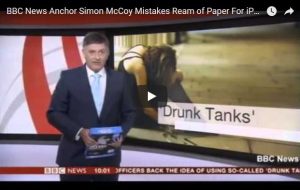 This round to Kim Jong-un? 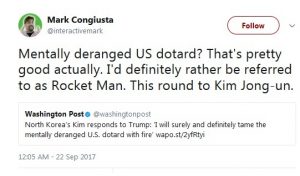 Researchers have found 30 words that have fallen out of everyday English language. Here are just some of them:

Betrump: To deceive, cheat; to elude, slip from

Slug-a-bed: One who lies long in bed through laziness

Sillytonian: A silly or gullible person, esp. one considered as belonging to a notional sect of such people

The fluid nature of sheep-herding 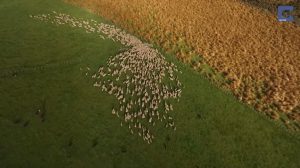