Watch a youngster take an amazing catch from the stands during Yorkshire’s T20 Blast win over Durham. Watch the video here 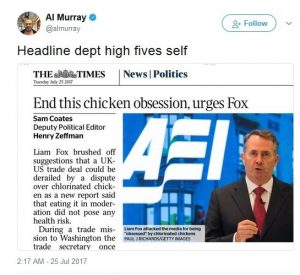 “I thought chlorine washed chicken was a Heston Blumenthal recipe, if I’m honest.”

“Presumably because she, unlike everyone else on Love Island, was wearing some actual clothes” View the tweet here 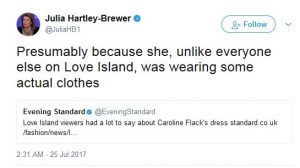 “The fact that Mr Blue has since convinced himself that the offer was a serious one, and that a legally binding agreement was made, shows only that the human capacity for wishful thinking knows few bounds.”

Para 142.   In the course of a jocular conversation with three investment bankers in a pub on the evening of 24 January 2013, Mr Ashley said that he would pay Mr Blue £15 million if Mr  Blue  could  get  the  price  of  Sports  Direct  shares  (then  trading  at  around  £4  per  share) to £8.  Mr Blue expressed his agreement to that proposal and everyone laughed.  Thirteen  months  later  the  Sports  Direct  share  price  did  reach  £8.    But  no  reasonable  person present in the Horse & Groom on 24
January 2013 would have thought that the offer  to  pay  Mr  Blue  £15  million  was  serious and  was  intended  to  create  a  contract,  and no one who was actually present in the Horse & Groom that evening – including Mr Blue – did in fact think so at the time.  They all thought it was a joke.  The fact that Mr Blue has since convinced himself that the offer was a serious one, and that a legally binding agreement was made, shows only that the human capacity for wishful thinking knows few bounds.

The colourful network simplifies the road system of 43 – 410 AD Britain for modern readers. Click here to view the map 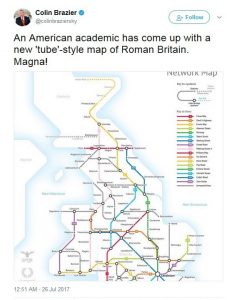 “Far be it from me to argue with science but I have never found this to be the case.”

“It does, but it’s usually weeks down the line, suddenly and when you really don’t want to remember it” View the tweet here 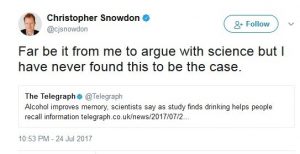 Churchill’s Doctor’s Note for alcohol during Prohibition in America

Convalescence…….“necessitates the use of alcohol especially during meal times. The quantity is naturally indefinite but the minimum requirements would be 250 cubic centimetres.” View the tweet here 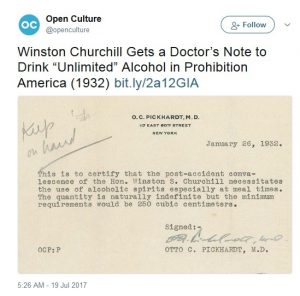