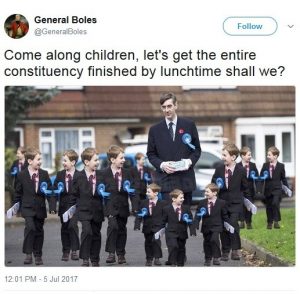 Conservative MP Jacob Rees Mogg is gathering much support on social media. The Oxford-educated Conservative backbencher is known for his unique oratory and sardonic put downs and is now finding fame on Instagram.

With the recent arrival of his sixth child named Sixtus, the above tweet could become a reality. It says:
“Come along children, let’s get the entire constituency finished by lunchtime shall we?” 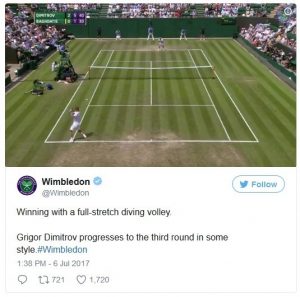 Grigor Dimitrov stunned Wimbledon with this shot. He said afterwards:
“The diving volley, there is nothing else you can do. You dive and you pray. They come pretty natural. That’s the beauty of it.” Watch the full-stretch diving volley here. 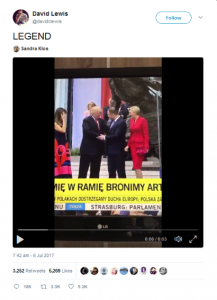 Trump left hanging when Polish President’s wife walks straight past him as he tries to shake her hand.

The wife of Poland’s President, Andrzej Duda, appeared to glide past the President as he waited for a handshake, leaving him with a somewhat nonplussed look on his face.  Watch the video here. 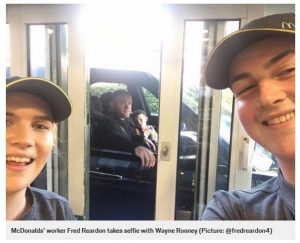 Wayne Rooney is not impressed after being snapped in this McDonald’s Drive-Thru selfie. Read more here

Those watching ITV’s anthropological version of Planet Earth, aka Love Island, might have noticed an athlete by the name of Theo joined the housemates.

However, according to the Mirror, the 6ft 5in sprinter did not tell British Athletics he would be entering Love Island.

“British Athletics was unaware of Theo Campbell’s participation in this reality TV show.”With the IAAF World Championships in London just a month away, we would expect all those in contention for selection to be 100% focused on their training and preparations to compete against the world’s best athletes.”

Michael Tracey tweets the below which is likely about to happen in most media. 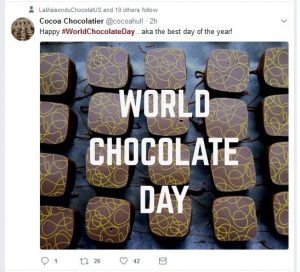