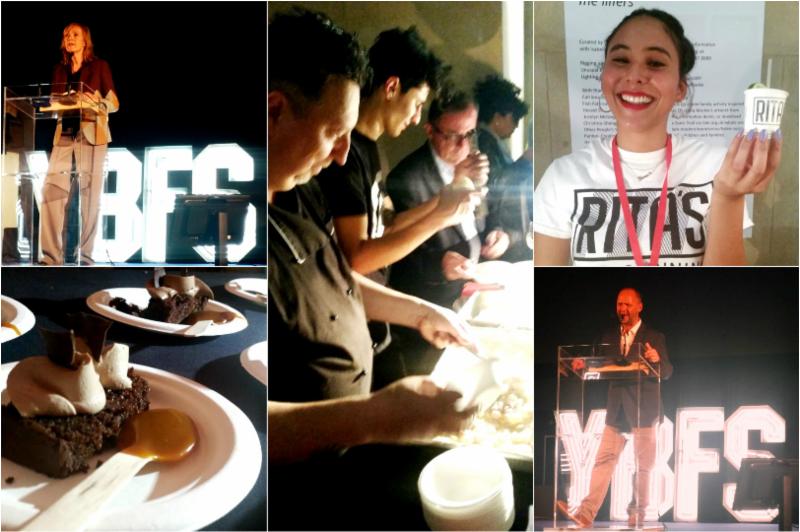 Foodies from across the land gathered at the Tate Britain this week for the 2015 YBFs  the Young British Foodie awards. The lively event highlighted the best of British talent, creativity and innovation in food and beverage. The Young refers to products, not the entrants  anyone can be nominated for an award across nine categories.

Now in their fourth year, the YBFs were founded by food journalist Chloe Scott-Moncrieff, Taste PR founder Amy Thorne and Lily Vanilli founder Lily Jones, with the mission of highlighting the waves of talent that emerge onto the scene year after year, from chefs to bakers to dairy farmers.

Each category was judged by its own specialist judges, for example the decision of the best food writing was taken by Fay Maschler, Marina OLoughlin and Tracey MacLeod, while the fate of the meat entrants was given to Richard Turner, James George and Neil Rankin.

Chloe Scott-Moncrieff explains; From butchers to bakers to mead-makers, Britains next culinary generation were all at The YBFs 2015 at Tate Britain . Some had stalls to serve from, others came armed with Pacojets and cocktail shakers. Together, they filled the galleries with a frisson, showing that Britain, despite the endless economic doldrums, has a swaggering confidence in food and drink. These creative craftsmen and women are the future of food in Britain.

The winners in each category were as follows:

Laura really has a fresh voice, lots of energy and edge – and really makes me want a slab of tres leches Marina OLoughlin

The jury loved Tom’s product. It was local, steeped in history and tasted great Tony Conigliaro

Adams was a little journey. There was a flow throughout his dishes. He was overall excellent James Knappett

Talk to a food-lover about Cornish produce and they will usually mention Matt Chatfield from The Cornwall Project. Not only is Chatfield responsible for linking the amazing Launceston butcher, Ian Warren, to luxury establishments such as Claridge’s and The Ledbury but he has also single handedly got Cornwall’s best producers in pioneering restaurants like Tom Adams Pitt Cue and James Lowes Lyles. He’s created a Cornish movement Chloe Scott-Moncrieff

In what was another extremely competitive year, Will’s single-minded determination to push his craft into unexpected and exciting new territories really stood out – and the beef rump cap he’d cured was simply the tastiest thing we’d eaten all day James George

This year’s YBF winner in coffee typifies so much of what the industry should be celebrating; a genuine connection to the farmers growing our coffee, a hands-on and involved approach to the craft of roasting, and youthful entrepreneurial enthusiasm Tim Williams

Phil was a clear winner. He is very imaginative and passionate about what he is doing. He has a fantastic attitude , lots of skill and is a real star of the future Simon Rogan

There are so many things that make a good trader – service, execution, atmosphere, aesthetics, sourcing, good chat but really, when you taste that food and it makes your entire being SING, that’s when you know you have a winner. This food is sublime, exciting and made us all jump with joy it tasted so good Petra Barran

The awards evening has been a celebration of The YBFs and guests were invited to taste the culinary talents of some of the YBF entrants, including ROYBREAD, DECATUR and BABELLE. And back for a third year, guests enjoyed new creative cocktails from Chase vodka, extra sweet honey beer by Hiver Beer and carefully selected Prosecco, white and red wine from Tate Food.

EP Taste is dedicated to seeking out food and drink innovation and showcasing it to the industry.
For more information please contact Amy Lainchbury