“Age is something that doesn’t matter, unless you are a cheese”.
Luis Bunuel

As the EU referendum dicussion rolls on, Boris compares the EU to an ill fitting pair of pants.

“I think the EU is not fundamentally anti-democratic. We have no way of kicking these people out, we don’t know who they are. They are taking far too much of our democracy away, and it’s time we took it back.

I think when you look at the EU now, it reminds me – walking around this wonderful factory – it makes me think of some badly-designed undergarment that has now become too tight in some places, far too tight, far too constrictive, and dangerously loose in other places. Now, is that the kind of undergarment we make here at David Nieper? Absolutely not, absolutely not. That’s why are you are continuing to do so well.”

Demand for uniformity in fruit and vegetables is part of the increase in food waste across the UK. BaxterStorey are now working with a UK supplier to help eradicate its wasted asparagus crop in the battle against food waste in the sector.

Watts Farm in Kent and Essex supplies supermarkets, foodservice providers, restaurants and more with the demand  for grade one product that is uniform, perfectly straight and no imperfections. Last year, the farm produced 36 tonnes of perfectly good asparagus, but 15% of this did not meet the specification required and was graded as waste. Uneven asparagus is graded as class two or three, and much of this product is used as compost.

With so much waste, BaxterStorey has committed to purchasing class two and three asparagus from Watts Farm to use across many of its locations. 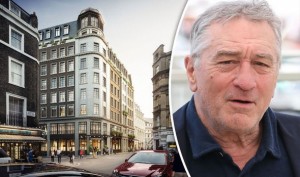 You booking with me?

De Niro has submitted planning permission for the hotel along with his partners in the venture, BD Hotels and Capco. Located in the heart of Covent Garden, the 83 bedroom hotel will have a spa, two restaurants, a deli and a members club. Click here to learn more

Why going green pays off – The 2016 Role of Sustainability in Travel & Tourism report revealed that 60 percent of U.S. travelers (105.3 million) have taken a “sustainable” trip in the last three years and that these travelers are extremely valuable to the tourism industry. Read more

Hilton Worldwide is expanding his portfolio into some new and exotic destination. Hilton has announced it will more than double its presence in Peru over the next three years with the development of seven new properties across four brands. Find out more

How machine learning will transform hospitality. The hospitality industry has not always been at the forefront of high-tech innovation or implementation. Until recently, most of the bookings, transactions and administrative tasks at a hotel were handled manually. Where is the IT market for hospitality leading and what are the new trends? Find out more

British Airways looks to start charging for in-flight food and drink. BA is rumoured to be teaming up with Waitrose to provide on-board food, but it will cost passengers. Read more

What are the best hotels in and around Wimbledon? The Telegraph has put together the top places to stay in Wimbledon, Wandsworth, Clapham, Earl’s Court, South Kensington and Chelsea, including public transport routes from the hotels to the grounds. Read more

BBC Food website will close – Here’s how to access its recipes. The BBC Food will close as part of a shakeup at the corporation, the organisation has confirmed. Find out more

Thailand closes Koh Tachai island that is too beautiful – with local officials saying the island’s main beach can hold around 70 people, but had in excess of 1,000 visiting, they have had to close the island in a bid to end the negative impact on environment. Read more

Stalin, vodka and nuclear weapons: how not to write about Russia. From an abundance of War and Peace references to claims of extremism, Russia! debunks the most persistent stereotypes Read more