This was not welcome news. Boris Johnson warning he would be filing late was like Quentin Tarantino warning his next film would be violent. Boris always filed late.” 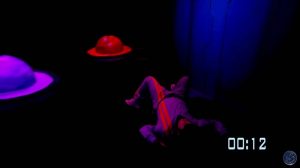 The contestant gets himself into a little bit of a situation in a futuristic game.

During The Natural History Museum’s Ask a Curator event on Twitter, a man asked who would win in a staff battle using their exhibits/items.

The Natural History Museum started with:

“We have dinosaurs. No contest.”

But then the Science Museum jumped in with:

“[ The Natural History Museum ] is full of old fossils, but we have robots, a Spitfire and ancient poisons.”

The ‘battle’ then carried on for quite some time.

Strong And Stable – the reason for May’s Presidential Election Campaign

Boris was hidden away during the election campaign because internal Tory research found he is no longer popular with voters, according to Theresa May’s ex-Chief of Staff Nick Timothy. His explosive claim is made in the forthcoming book on the June election from POLITICO’s own Tom McTague and Bloomberg’s Tim Ross, Betting the House. In the book, Timothy says the Tories focused relentlessly on Theresa May’s “strong and stable” leadership because their private polling showed no other senior Tory was popular with the public, other than Ruth Davidson in Scotland. Timothy says the advice was: “Nobody in the Cabinet is popular — keep them away, even Boris.” The findings were presented in a memo from campaign strategist Lynton Crosby’s firm CTF to May’s team in April 2017.

More on this here.

There is a great need to share knowledge in these times of change. It can benefit all in terms of new business, raising the bar for positive change and building meaningful relationships.

On Tuesday 14th November, EP is bringing together consultants, caterers and clients for a full-day of powerful insights and to engage in a meaningful debate.

The RFU have announced that England Rugby Hospitality will become the exclusive provider of official match day hospitality at Twickenham Stadium from autumn 2018.

Does this new venture with Keith Prowse change the scene for future catering in stadia?

Fans will be provided with a range of new hospitality options from informal dining experiences such as a chop house themed restaurant serving quality meats, paired with premium wines and real ale, to a more upmarket restaurant serving classic English food with a contemporary twist.