A man’s refusal to give up his seat on an overbooked United Airlines flight led to a disturbing scene Sunday that has travelers up in arms over airline policies.“I apologize for having to re accommodate these customers” was the official comment from Oscar Munoz, CEO of United Airlines. 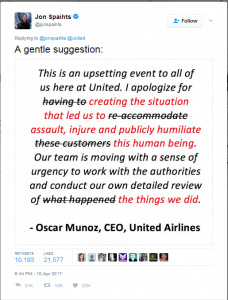 Would you swim in a glass pool hovering 500 feet over the Texas streets?

Click here or the image to watch the clip 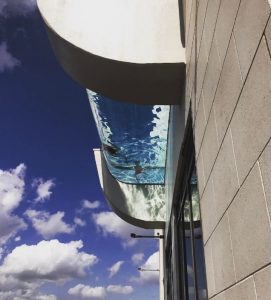 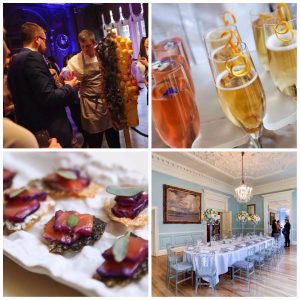 Leading London caterer H+J launched its new fashion themed spring menu and showcased its innovative food in an evening of style, creativity and innovation at Dartmouth House in London on Thursday 6th April. Over 80 guests attended the event designed to connect fashion and food and gave invited people a real ‘Taste of Fashion’ at the historic Mayfair venue where H+J provides a complete catering and sales service.

Held at Dartmouth House, home of the English-Speaking Union, ‘A Taste of Fashion’ showcased the newest, on-trend food offering from H+J, in preparation for the busy spring and summer seasons.

The experiential fashion themed meat-free menu included some unusual flavour combinations such as seared tuna and curry sponge with a coriander cress, crab bonbons with a bisque mayonnaise and lavender sorbet with soubise apricots. Other dishes included ceviche scallop and seawater bubbles with a seaweed crisp and cockle popcorn buckets. The highlight of the evening was a mannequin centrepiece unveiled in the Churchill Room which was decorated in multi-coloured, mirror-glazed puddings and based on the fashion theme of ‘punk’. 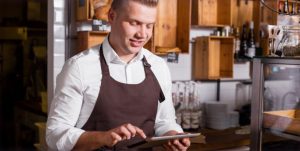 The London-based firm is to use the funds to expand internationally, increase its staff count and improve its proprietary technology platform.

Tenzo is a Techstars alumni, having participated in the London 2016 cohort. It helps restaurants save money by analysing a variety of data points. For example, it can help restaurant managers identify their most productive member of staff and gain a better understanding of the most- and least-popular dishes on the menu.
Read more

Hospitality industry to lose millions if Irish Good Friday alcohol ban is lifted: The Good Friday alcohol sales ban would be lifted if the bill were to be passed, which many people took to Facebook and Twitter to celebrate. However, not everyone has found it to be such great news.
Find out more

Hotel industry leverages power of data: Before its acquisition by Marriott was completed last September, hospitality company Starwood Resorts and Hotels Worldwide changed its approach to a problem that many chain hotels face — how to maximize the value of its spending on translation services for its property websites worldwide.
Learn more

Graduate Hotels installs Bluetooth shower speakers: Waterproof and featuring Bluetooth capability, the shower speaker allows for guests to listen to their own personal playlists from their mobile device and enjoy superior sound while showering in any Graduate hotel.
Find out more

Up to 80% of carrier customers underestimate international roaming costs: New study from GfK and T-Mobile shows most have no idea how much it really costs to take their phones out of the country. Read more

Spanish Government threatens to ban holiday rental apartments this summer on the Island of Mallorca: The Tourism Department of the “Govern Balear” is currently in the process of drafting new regulations to tackle the holiday rental industry but these are not due to come into effect before the beginning of 2018, at the earliest. Find out more

Air travel demand up in February, despite US travel restrictions: Global demand for air travel rose 4.8 percent in February, thanks to lower fares and improving economies, with no major impact from an attempted U.S. travel ban.
Read more

Asian hotel giant Minor International circling UK market for entry: One of Asia’s top hoteliers has accelerated plans to expand in the UK as a result of Brexit, it has said.
Read more