“It is incredibly hard to get to the bottom of where things go wrong. It’s often several circumstances and it’s quite hard to isolate if there is one particular problem.”

BBC TV chief, Charlotte Moore, said the above on the source of the mumbling problem in their TV shows. Some of the audience have reported they find shows such as ‘Happy Valley’ hard to understand. Whilst the BBC have said they are investigating,many have argued it is simply the actors who are mumbling. 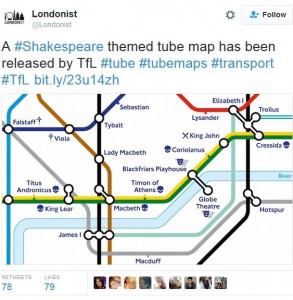 Transport for London (TfL) is marking the upcoming 400th anniversary of William Shakespeare’s death in the best way it can — by releasing a special edition Shakespeare-themed tube map.

Station names have been replaced with names of Shakespeare’s plays and characters on the new map. Each tube line has been given a specific theme, with the stations on that line renamed to fit in with the theme.

Cleverly, the interchange stations have been named as characters which fit onto more than one line. Macbeth (Embankment station) for example, is on both the ‘Plays’ line (Circle line) and the ‘Villains and Rivals’ line (Northern line).
Click here or the image to read more. 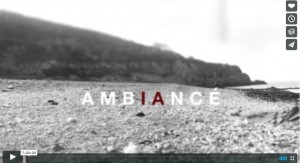 Ambiancé: The world’s longest ever film gets a seven hour trailer

The film lasts for 30 days and is directed by Anders Weberg from Sweden. The very abstract non-linear film features two performance artists on a beach in southern Sweden – there are no cuts. Is this a possible future for film?

To view the full trailer click the image or here.