From the Chairmans’ Club to the Entrepreneurs Forum there are a lot of forums and events to look forward to from EP!

“An Evening with…” gourmet dinner evenings

“An evening with…” is a series of dinner events which afford the opportunity to guests to enjoy a seven course taster menu prepared by Michelin Star Chef Herbert Berger and his team at The Innholders Hall while listening to the stories of the guest of honour from industry. Upcoming guests include:

Edward Griffiths, Deputy Master of the Royal Household. With such a varied and

eventful role, Edward has some fascinating stories to tell and observations to share. The birth of the Prince of Cambridge notwithstanding, Edward has many experiences to recount detailing life inside the Palace walls and managing a household within which the World’s oldest Monarchy lives.

Gerard Basset OBE, is the reigning World Champion Sommelier and was named Decanter Magazine’s “Man of the Year” 2013. He is also the only person to ever simultaneously hold the title for “Master of Wine”, “Master Sommelier” and MBA Wine honours. Gerard’s career spans a broad spectrum of experience including co-founding the Hotel du Vin Group and latterly the renowned Hotel TerraVina in the New Forest. In late October he will talk about his experiences in industry and some of the fascinating elements of his career.

from his childhood in Nazi Occupied Belgium. It’s an incredible story to hear, made all the more impressive once you learn what he has achieved since then. Marc’s career has taken him all over Europe and the rest of the world including more than two decades spent leading the well regarded “Catering and Allied”.

Hosted in the magnificent private boardroom of the historic Fortnum & Mason on Piccadilly, this event is an opportunity for a select group of Chairman to dine in one of London’s finest establishments. Fortnum & Mason CEO, Ewan Venters will also be in attendance to discuss his thoughts & observations on the industry today and plans for the future of the business.

The EBLH Network will take a short hiatus for the month of August however we are delighted to be hosted by The Montcalm Hotel, Marble Arch for another evening of food, wine and friends in mid-September. We look forward to seeing many returning faces yet again as well as new members of the group.

The foodservice industry has been enjoying a period of growth recently with a number of new players on the market, as well as expansion of some of the established players. But who is leading the charge?
We are delighted to announce that EP and Zolfo Cooper will publish a report on the top 30 companies in the sector later this year. This will include a forum presentation of the research findings and an event with the Managing directors of the companies themselves.

The Entrepreneurs’ Forum, in partnership with IndiCater

Social media and its place in business has become something of an enigma over recent years. There is little doubt of the importance of having an online presence, however there are also some fears about the dangers surrounding a poorly managed online presence.

One company who would say that social media is integral to growing a new business is The Mothership Group. The Mothership Group encompasses “The Queen of Hoxton”, “The Book Club” and “Stories” – three London venues which have become synonymous with a young and increasingly online clientele.
Jon Ross is one of the founders of the company and has long since advocated the positive uses of social media in business. In late September Jon will speak at an event for other entrepreneurs in the sector, to discuss their particular approach to youth engagement and the evolution of their business model. 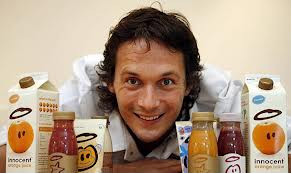 Following on from the inaugural event with Richard Reed, a co-founder of “Innocent” the next forum will be hosted in September at the Joelson Wilson offices on Portland Place. This event is targeted towards the next generation of leaders in the industry, and acts as a network to share insight and stories which impacts business thinking.

In partnership with WMT LLP we are delighted to host the next financial briefing focused on the topic “Tax – a key part of your building or renovation plans”.
Refurbishments and renovations in the hospitality sector are a relatively common occurrence however while the question “How much will this cost?” is inevitably the first to come to mind, many operators continue not to appreciate how tax can affect plans too. There are tax systems, incentives and savings available to businesses looking to upgrade buildings access and improve the end-customer experience. WMT LLP will deliver a presentation detailing how businesses can avail of these and how to make a refurb even more cost effective.

The EP Forums and Events are hosted on an invitation only basis. If you’d like to know more about any of the events listed please contact Arlene McCaffrey for further details.