Digitalisation Versus The Imperfect Person

Have we allowed leaders to become lazier in how they behave?

In the last few days, Stephen Fry gave a lecture at the Hay Festival in Powys which focused on how there is a danger that we all let technology lead change too much. There is a need to find a balance between digital change and life balance. Stephen Fry argued that all need to prepare for the internet of the future, or face the worst of science fiction’s predictions.

“Whether it is winter that is coming, or a new spring, it is entirely in our hands so long as we prepare,” he is reported as saying. “While it’s hard to calculate the cascade upon cascade of new developments and their positive effects, we already know the dire consequences and frightening scenarios that threaten to engulf us”.

Stephen Fry went on to say a “great transformation in human society” was under way, greater than both the printing press and industrial revolutions. It was “the greatest change to our way of living since we moved from hunting and gathering to settling down in farms, villages and sea ports and started to trade and form civilisations”, he added. Whether it will alter the behaviour, cognition and identity of the individual in the same way that it is certain to alter the behaviour, cognition and identity of the group, is a hard question to answer. “But believe me when I say that it is happening. To be frank, it has happened.” – He concluded.

The War chests of Technology

The “war chests” of technology entrepreneurs were helping to fund the rapid development of artificial intelligence and robotics, he said. Stephen Fry revealed to the audience that he has an internet-connected fridge at his home in Los Angeles that allows him to check its contents via his mobile phone. He also said he owned an automated car that allowed him to read a book or watch television as the car drove itself along California’s freeways.

Clearly the above lecture was a warning of the dangers of letting the advancements in technology lead people rather than vice versa but, as throughout history, it is not quite as straightforward as it may appear for there are also many signs of  the counter happening. There is increasingly evidence of many rejecting increased digitalisation and seeking lives dominated by more “old fashioned” qualities:

However, all the above evidence is led by an individual.

There is a real lack of any leadership versus the advancement of technology by any business, politician or Institution. In fact all are embracing technology in the hope that it is helps.

As with all things, it is about balance and Stephen Fry is right when he states “Whether it is winter that is coming, or a new spring, it is entirely in our hands so long as we prepare”.

Business does need to do more to prepare and this means understanding the individual – as this is both the consumer and the employee. Humans have always been creative and relatively free spirited that have striven to be free. A balance will always be found but it is important that business does embrace the need to develop new people strategies and invest in people almost as much as in technology.
Great people and great culture will always beat a great technology led business and it meets the emotional needs of individuals – employees and customers and yet culture is spoken of far less than it was in past times. Leaders have stepped away from visible leadership and everything is over managed today. Even over the weekend during the worst of the BA crisis, the CEO would not face the press but released a prepared statement via youtube.  Is this real leadership? Have we allowed leaders to become lazier in how they behave? Do we even possess the same quality of leader in the digital age? (Do we really believe that today’s political leaders are as good as those of even ten years ago – Obama, Brown, Blair). Maybe every message today needs to be too controlled? 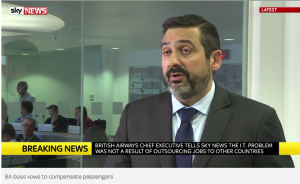 It is interesting that Stephen Fry has become a case study in recent times. Only last month he was investigated by the Irish police for blasphemy by asking ‘Why should I respect a mean-minded, stupid god who creates a world so full of injustice and pain?”
Did this really need an investigation? Was it worse than many things said during “Life of Brian” which also caused huge controversy when it was released over 35 years ago or maybe we have just not moved on?

As the world strives for greater AI, maybe the less perfect, more personal is also important.