Having been one of the leading players in the story of London’s hotels over the past 40 years in late 2015 David Levin was awarded an MBE. Looking back, it is almost amusing to consider that  David managed to fund the launch of the hotel with an £800,000 loan from Barclays Bank that was almost given on trust in David and the fact that Capital and County had accepted an offer from David on the lease. It is something that just would not happen in today’s market. Over the next 20 years, The Capital Hotel grew to become one of London’s leading hotels and had grown through the three-day week and two, if not three, recessions.

Today, as David discussed his long and successful career and story, we noted just how few hotels still possess an owner at the core of the living operation and just what a rarity it had become. As one listens to David talk, one soon realises that he is an operators’ operator in the true sense of the phrase and has a deep and abiding love for the hospitality industry. And as one looks at his career, it becomes clear that David is not just a hotelier… 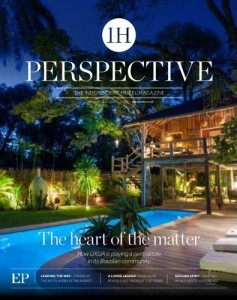 The new magazine is centred around the Global Independent Hotel Sector – arguably a market that has performed strongly over the last few years and shown the ability to innovate, create and adapt.

It is often that the great boutique hotels of the world and the large corporates which attract the most comment but the independent sector has just got on with the task in hand.  Perspective brings all three together.