China’s population is already well over 1 billion and growing, but as it stands only about 0.6% of the approximately 16 million people who travel abroad from China venture to UK shores. What, if anything, can be done to increase this market share?

At this morning’s International Forum, Simon Kerr (Group Commercial Director for COMO) and Derek Picot (Board of Directors, Jumeirah) raised some interesting points about factors to be considered when it comes to the growing Chinese economy.
The audience certainly didn’t let them off the hook with easy questions either, as the panel discussion threw up some interesting observations and points of opinion. 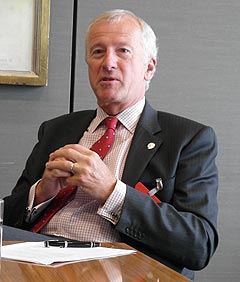 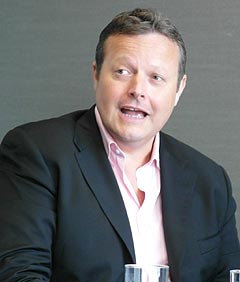 Proudly sponsored by HSBC, this morning’s international forum provided an opportunity for a unique group of industry leaders to speak openly about the challenges facing companies wishing to maximise their exposure to the growing Chinese market as well as those looking to grow their presence in the region.

What is the inbound tourist to the UK from China looking for?

The Chinese leisure traveller is

The Chinese business traveller is 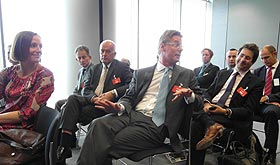 Which hotel sectors are growing, or expected to grow as a result of increasing Chinese tourist numbers in to Britain (London)?

Both Simon and Derek were of the opinion that it will be the 3* & 4* hotels which will benefit in the short-term, as tourists continue to travel in groups. In the long term, once tourism to the UK becomes more of a staple, they will travel solo and to destinations more further afield than simply London.

The “ones to watch” also are the quietly confident middle-classes. Travelling abroad is still considered a privilege in China, and as this sector experiences growth in personal wealth their propensity to travel abroad has increased. Overseas’ travel among this group is considered to be a sign of wealth and prosperity and Britain is a destination of particular interest.

There was also a consensus in the room that those hotel chains with an existing presence in China are believed to possess a greater strength of position for potential growth.

Another observation made about the luxury traveller is that they’re becoming increasingly savvy to cost and expenditure. Though eager to travel 1st class as often as possible, they wont “swallow” the extra airport taxes incurred for departing from London and so will take economy seats to somewhere like Frankfurt and then promptly change carrier to another airline charging significantly less for first class fares.

What are the fundamental differences between Chinese and UK/US/Euro travellers?

It’s important to remember that the typical Chinese tourist will only get about 2 weeks holiday time annually. When they travel they tend to do so in short “bursts”. Holidays of a week or less to long haul destinations are not considered to be out-of-the-ordinary as they might be to a tourist from the UK or Europe.
Where some European and American tourists have started looking for “urban experiences” such as tours of Camden Market, London by Night or Rock Festivals the Chinese tourist is typically still more interested in the tradition and heritage of the UK.
As Chinese tourists continue to holiday in groups, they often visit a city or destination for a short period of time and then move swiftly on to the next place.

One observation made by both Simon and Derek was the inclination of Chinese tourists to be vocal in public places. This should not and is not a mark of disrespect or rudeness, but rather an integral part of their personality & makeup. Where Europeans and/or British travellers may be inclined to speak in hushed tones while in a breakfast dining suite, Chinese travellers will happily chat to one another from across a room.

It was also pointed out that a Chinese person is more likely to avoid direct confrontation or criticism.

The question: “Is everything OK?” is unlikely to garner adequate feedback. In order to truly know what a Chinese person is feeling, the question must be asked correctly in the first instance: “How do you think our service could be improved?”

What are the barriers to entry for the typical Chinese traveller into the UK?

Unfortunately the same issues as previously mentioned in other EP forums continue to dog the hospitality industry. The greatest barriers are believed to be