Some will argue that possessing a good FD is the most important appointment at board level.  The relationship between MD and FD is certainly a crucial axis as this relationship will reflect the approach and culture of a business almost more than any other. Of course, some will argue that it is operations; others HR but the finance team will hold the power over many decisions. Just look at how important the axis was in the Blair-Brown days.  This may have been the political arena but business is no different.

Now meet Alex Hinchliffe, Finance Director for ISS Food & Hospitality who believes that he has an important role in helping to break down the traditional operations barriers which would classify finance as sitting apart for the operators. 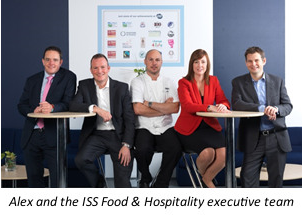 “In the past, finance was regarded as an isolated department to the business. If you asked other colleagues what the finance team did, their answer would be along the lines of ‘Work with numbers and produce reports’. Many hadn’t even met the finance team. When I joined the business a year ago this was a point I knew I wanted to change.”

Alex’s integrated approach to finance and business is fast becoming the norm at successful companies.  With CFOs and Finance Directors now becoming key players both strategically and operationally, it is not so much about how talented they are as ‘numbers mechanics’ as how much they can use the figures to lead the business in the right direction.

“I knew I wanted to change the focus and interactions of the finance team from day 1. Their roles would shift from solely producing report numbers for others to interpret, to becoming part of the business and being able to understand, challenge, support and most importantly advise. Involving them more with the operations team and customers made the finance team understand that they too could have an impact on results and take an ownership of what is produced.” Alex confidently states that it isn’t about having a new breed of finance person but most importantly it is about creating completely new mindsets – “understanding costs, risks and appraising investment decisions will always be a core skill, but things like emotional intelligence, presentation skills, negotiation skills and being able to influence others are all now vitally important”.

The finance team now support the hospitality service in numerous ways – even down to attending food launches and innovations days, not only to assess the viability of each project but also to engage with those team members who have to deliver the services.

Alex’s clear strategic thinking within finance and the commercial direction of the company is evident for all to see – but it is his contribution to the world outside of his immediate remit which makes him different. He is very passionate about the business and gets involved in all areas – his extensive and varied industry knowledge gives him a valued, credible and extremely respected perspective amongst all his peers and his advice and opinion is often sought.

“What I have most enjoyed about working in ISS is that despite being part of one of the largest organisations in the world, each business operates independently. Team members are fellow entrepreneurs in their own disciplines and through that we are highly focused on innovation.  Suggestions are encouraged to come from anyone in the Food & Hospitality business and are welcome because of the trait we all share – we are all extremely passionate about food.”

It has been said that finance, revenue management and procurement specialisms in the hospitality sector are set to become as integral as the general manager’s role. While there is no doubt the customer experience is a vital component to the success of any business in the sector, be it hotel, restaurant or contract caterer, it is also clear that the numbers must be strategically aligned with the vision of the future. As more and more ‘numbers mechanics’ move away from simply reporting on what has happened and turn their attention to planning and strategising for tomorrow, it will be people like Alex who drive change and progress within the hospitality industry.