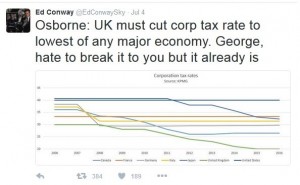 Chancellor George Osborne said in an interview with the Financial Times the reason for cutting corporate taxes is to create a “super competitive economy” in the downturn.

Others have said the unpopular policy is revenge, so that the Leave campaigners feel the negative consequences of their actions.

However Ed Conway from Sky has said in the tweet above that the UK already takes money from companies at half the rate from the USA. 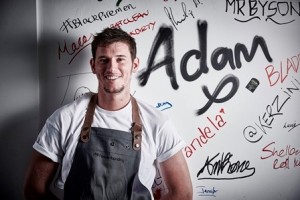 Adam started as a trainee chef at Gleneagles and went on to win Scottish Chef of the Year 2015. At only 27, Adam believes strongly in the importance of providing platforms for young creativity, in any form, to be both showcased and developed.

The Royal Academy of Culinary Arts Awards of Excellence 2016 announces the finalists.

The AAE is for young professionals in the hospitality industry, known for recognising and encouraging the most talented ambitious Chefs, Pastry Chefs and Waiters. Since it began in 1983 over 500 young professionals have achieved the award, setting them off on highly successful career paths.

To achieve the Award candidates had to attain a score of over 70% in the tasks set and judged by industry luminaries chaired by John Williams MBE, Executive Chef, The Ritz London and Chairman of the Royal Academy of Culinary Arts.

Two-in-one hotels set to grow in Europe. Hotels where two brands are run by the same operator and located next door to each other or within the same building, are set to grow. Find out more.

glh Hotels launches ‘Choose Your Own Room’ booking site. The new website allows guests to select their exact room they want to stay in before making a reservation.
Find out more.

“I work in room service at a 5-star hotel – these are the biggest things I wish guests wouldn’t do”. Find out what a hotel employee from a five-red-star hotel says can make a truly great stay. Read More.

Is the Olympic city really safe for tourists? Rio is polluted, dangerous and often overwhelming but is it the best place to go as a tourist? Read More.