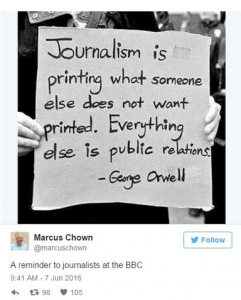 People on social media have been criticising the BBC for being too left wing/too right wing for years, yet by doing so they ended up using fake George Orwell quotes to lecture the BBC on journalism.

Below one of the funniest replies to the tweet:
“Irony is, I don’t think there’s any evidence Orwell ever said this. Checking your sources. That’s journalism.” 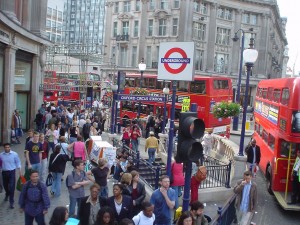 According to the most recent consumer spending data from Barclaycard, figures rebounded in May, rising 3.6 per cent, after two weak months.

The revival is likely down to the arrival of the spring weather and the bank holiday, which boosted spending on the home, clothes and entertainment.

Spending on the high-street consequently recorded positive growth for the first time since October 2015 (up 0.7%).

The research shows that the outlook remains uncertain however, as consumer’s confidence in the wider UK economy fell from 35 per cent to just 30 per cent.

Confidence in the wider UK economy has continued to drop, down to 30 per cent (from 35 per cent in April) – with ongoing uncertainty about the outcome of the EU referendum still a big cause for concern. 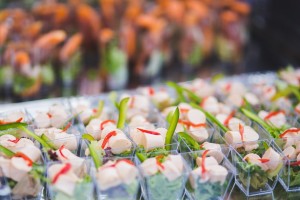 How Tasty Catering Is Serving Up
A New Generation Of Entrepreneurs

Forbes reports the story of Jamie Pritscher, who has been supported by the catering company he was working for to start his own business.
Read more

InterContinental has announced a $200 million investment in Crowne Plaza Hotels & Resorts in the Americas region.  The Crowne Plaza Accelerate plan, which will run for a three-year period,  Read more

Ritz Paris, Favorite Hotel of Hemingway and Chanel, Finally Reopens. The iconic hotel has been closed since 2012 and after a revamping project that supposed cost $450 million it is now ready to open its doors. Find out more

CEOs of 5 Leading Hotel Brands express their Hopes and Fears for hospitality in 2016. Airbnb, disease, terrorism, the TSA, Donald Trump, and the best business climate ever mark the biggest trends impacting hospitality and tourism today, according to the CEOs of Marriott International, Hilton Worldwide, InterContinental Hotels Group, Choice Hotels, and Loews.Find out more

More than half of all Africans are expected to live in cities by 2050: How is Africa’s urbanisation driving growth? According to the African Economic Outlook we need to turn urban areas into engines of development to create inclusive growth, jobs, better housing and social safety nets. Find out more

Tesco donates food to mosques to mark Ramadan – Tesco stores have donated food worth over £20,000 to 20 mosques in London, Birmingham, Manchester, Bradford and Leicester to mark the beginning of Ramadan. Read more