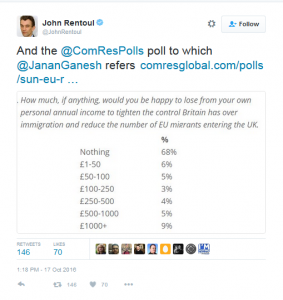 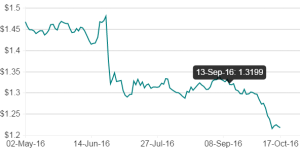 Sterling has fallen nearly 20% against the dollar since the referendum.

Last Monday it was trading at below $1.22 and €1.11, having fallen more than 5% in October on concerns about the economic impact of the UK leaving the European Union.
With the pound now almost a fifth less valuable compared to the dollar since the vote on June 23, the Bank’s deputy governor Ben Broadbent said the decline was helping soothe some of the effects of having trade relationships thrown into question.

What’s up with the Samsung Galaxy Note7 smartphone?

Samsung made the unprecedented decision to recall every single Galaxy Note 7 smartphone sold. That’s said to be 1 million of the 2.5 million that were manufactured.

The electronics giant has suspended production of its Galaxy Note 7 and asked owners to power down their devices following reports that replacements for the fancy smartphones can, like the originals, catch fire.

81 million meals served in a year of luxury dining at InterContinental Hotels & Resorts: With ten openings in the past year, the iconic brand continues to build its luxury and culinary legacy. Learn more


Keep up with the new ways millennial travellers are paying: Almost 1 in 10 younger travellers said that they had made a contactless payment when on holiday in the last 12 months, while 5% had made a mobile payments using a service like Android or Apple Pay.Read more here

What do guests really want? ALICE, a hotel service specialist, commissioned the research to help hotels understand how to serve guests better at a time when text, email and social media are quickly becoming the communication channels of choice for guests at upscale hotels and resorts. The results were obtained in an online survey of more than 400 frequent travelers from across the U.S. Find more

Chinese buyers increase their share of Australian hotel transactions: The increase in Chinese investment (which totals $715 million year to date) comes amid what has been a quieter period in the Australia hotel sector after a record year in 2016. Read more

Karl Lagerfeld to create international hospitality brand: The designer’s business has signed a long-term licensing agreement with the recently-launched licensing platform Brandmark Collective to open hotels, restaurants, private clubs and residential properties under the Karl Lagerfeld brand around the world. Read about it here

Hyatt builds European team to grow regional presence: UK’s first Hyatt Regency hotel in the UK – Hyatt Regency Birmingham – had proved a successful move for the company and it was now looking to boost its presence further in the UK. Learn more

A second Radisson Blu resort in Norway: Radisson Blu is one of the world’s leading hotel brands with nearly 300 hotels in operation in 69 countries and territories. It is now going through a rebrand in   Norway’s largest ski destination. Read More

Hilton To Open Hotel In Africa’s Tallest Development: The iconic Hilton Nairobi Upper Hill will be the 50th Hilton Hotels and Resorts property trading or under development in Africa Find out more

Marriott International to introduce three new brands to Cape Town: This announcement is an extension of Marriott’s existing partnership with the Amdec Group, initiated in 2015 with the announcement of the development of the first two Marriott branded hotels in South Africa. Read more