JFK Airport in New York: An old terminal soon to be converted into a hotel 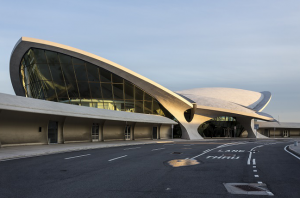 Designed by Eero Saarinen and built in 1962, terminal 5 became obsolete due to the growth in air traffic and more drastic security conditions, the TWA Flight Center at New York – John F. Kennedy will assume new purpose starting in 2018.

Two buildings including one that is classified as a historic monument, six floors, close to 505 rooms, and 265 million dollars: even in New York, the new hotel project underway at John F. Kennedy airport has the stuff top impress. The architecture studios Lubrano Ciavarra Architects and Beyer Blinder Belle were chosen to complete this project while respecting the emblematic silhouette of the TWA Flight Center, closed since 2001. Beyer Blinder Belle was in charge of renovations at Manhattan’s Grand Central Terminal and the Empire State Building lobby – and its restoration efforts at TWA Flight Center have already received the Excelsior Award for Public Architecture from the AIA New York State. 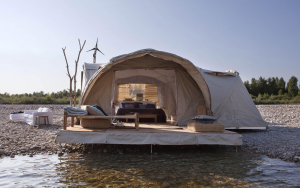 Your options for picking a vacation destination are typically limited to the places where hotels and other accommodations have already been built. But the London-based luxury travel agency Black Tomato is changing that with a new offering: a service that allows you to make your next vacation spot anywhere in the world.

Called Blink, the highly personalized service provides temporary accommodations and a staff to set it all up and take it all down later. Prices range depending on the location and the length of your stay, but they can go anywhere from $10,964 a person for a three-night vacation in Morocco to $29,600 per person for a four-night trip to Bolivia.

Blink can bring five-star accommodations wherever you want to go, as long as you don’t mind sleeping in a luxury tent. Here’s how it works.

Black Tomato said in a press release that it can set up its temporary accommodations “anywhere in the world where we can transport the tents and materials.”

Hotel software systems need some big picture thinking to move forward: Managing online distribution, guest engagement, OTA channels, revenue optimisation with only one login, having all data synchronised in real time, making your guests happy and last but not least, switching functionalities on and off according to your needs – this is what hotel managers want from hotel management software.
Find out more

Hospitality staff clock up 28 hours overtime at Christmas: In the equivalent time behind the bar or in the kitchen, a member of staff could pour 840 pints of Guinness or cook 168 steaks, says drinks distributor Matthew Clark, who commissioned the survey.
Learn more

UK one of Europe’s fastest-growing coffee markets: The latest European-wide report, ProjectCafe 2017 Europe, from analyst group Allegra World Coffee Portal, found that the UK, Greece and Turkey saw the biggest growth in the coffee market over the last 12 months.
Find out more

Robobutlers, morphing hotels and longevity spas: A Hotels.com ‘Hotels of the Future’ study: Hotels.com is looking to the future by partnering with renowned futurist Dr. James Canton of the Institute for Global Futures for this study study.
Read more

A new address in Shanghai for Le Meridien: The hotel Le Méridien Shanghai, Minang opened its doors in the Chinese megalopolis: it is the third property operated under the Marriott International brand in the destination.
Read more

Visas for tech workers could be limited under Trump administration: The main US visa program for technology workers could face renewed scrutiny under President-elect Donald Trump and his proposed attorney general, Senator Jeff Sessions, a longtime critic of the skilled-worker program.
Find more