“Surround yourself with the best people you can find, delegate authority, and don’t interfere as long as the policy you’ve decided upon is being carried out”. 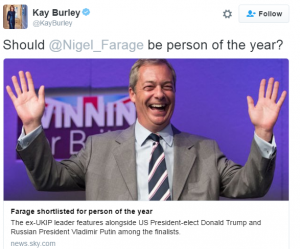 Should @Nigel_Farage be person of the year? 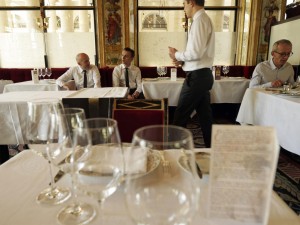 According to the latest consumer spend data from Barclaycard,spending growth hit 5.1 per cent in November, the second-highest figure since the data was first published in October 2011. This figure was boosted by record growth on essential items (up 4.7 per cent) which comprises supermarket shopping and petrol purchases.

The data also reveals that consumers’ confidence in household finances has remained flat at 55%; furthermore, only a third feel confident in the UK economy, down from nearly half in September.

Other key findings that have been reported:

H+J looking into emerging food trends at the IET London. 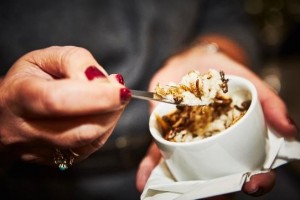 On 30th November, H+J held a talk at Savoy to give a real taste of the emerging food trends at the IET London:

This was the first in a series of H+J’s Trend Talks, a quarterly snapshot to clients on what is emerging, not just with food but with lifestyle in general. The inaugural talk was given the added twist of food for thought when top chef Ben Spalding provided a taste of the future.

On arrival, guests who thought they were sipping on pre-talk cocktails, were given Seedlip non-alcoholic gin to reflect the key emerging trend of cutting down on alcoholic drinks. The evening, attended by more than 50 of H+J’s clients in the Haslett, Flowers and Marconi rooms, kicked off with a talk by international Retail Futurist, Howard Saunders entitled ‘The Future Is…?.’ This explored a number of topics from the impact technology will have on us in the coming years to the latest street food trends.

Company director and Co-Founder Nathan Jones commented: “At H+J we are independent, intrepid and original; we are also forward-thinking and committed to our future. Providing for our future is a challenge that both the events world and food industry needs to address and H+J are determined and proud to be at the forefront of raising awareness.”

The Worlds Best Cities revealed for Fun, Going Out, Culture, Love and Affairs: Chicago is the world’s most fun city to live in, while Melbourne comes in second, Lisbon third and New York fourth, according to the Time Out City Index.
Find out more

The Nordic hotel industry. A changing landscape: Hotel industry professionals involved in the Nordic region see a shift toward more lifestyle properties and international flags over the next 10 years. Find out more

First China eco hotel for Alila:  Alila Anji will set the standard for eco-luxury in the region with local Alila Anji experiences as a throwback to simple and wholesome country living. Find out more

Ride-sharing service Uber has acquired a New York-based artificial intelligence start-up to speed up its progress in creating self-driving cars. The deal, for an undisclosed sum, will see Uber gain 15 specialist researchers who will form a new division at the company known as Uber AI Labs.
Read more

Colombia plane crash: Despite tragedy, 2016 has been one of the safest on record for air travel:  Even after the tragedy in Medellin — the worst plane crash this year where 71 people have died — air travel is safer than ever.
Learn more

Google to be powered 100% by renewable energy from 2017. Internet giant says renewable energy is increasingly lowest cost option and it will not rule out investing in nuclear power.
Read more